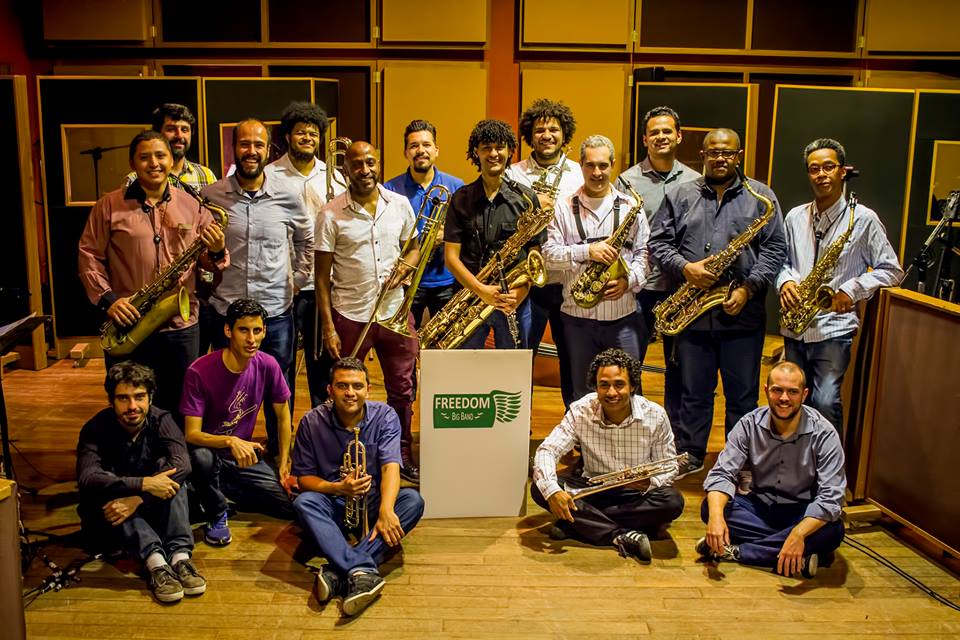 The Freedom Big Band group is one of the honorees of the #MCBEMCASA campaign. Below the public can learn more about the work developed by the band members. Check out!

Freedom Big Band is formed by 17 musical talents who have come together and dedicated themselves to art. Of the 17 musicians, 14 have in common the experience of performing in the renowned Young Tom Jobim Orchestra, popularly known as “Jazzinha”.

The name of the band makes explicit one of the goals of the musicians: to create each measure, making musical notes more than a mathematical count. The ability to improvise is not without price. Today, each musician is able to toast his listeners, thanks to the full dedication to theoretical study and musical practice with higher education of most of the members.

Influences
In addition to musical complicity, Freedom Big Band has the seal of influential names in Brazilian music such as trumpeter professor Daniel D’Alcântara, one of the main supporters of the band and who has already lent his talent in some presentations.

In the early years of Freedom, all concerts were dedicated to the repertoire and influences such as: Count Basie, Sammy Nestico, Thad Jones among others who were consecrated in the era of Big Band’s.

Repertoire
In search of its own musical identity, the group researches several Brazilian musical genres, curiosities, composers, and also something that joins other strands of art.

Check out the music video ‘Other Carnivals’:

The group’s first CD was released in 2018 under the name ‘Semana de Arte Moderna’, with the proposal of mixing pictures, sculptures, monuments, poems and curiosities from the Week of 22, the beginning of Modernism in Brazil.

Shows
Since the first performance in April 2013, Freedom Big Band has performed on stage at the Museu da Casa Brasileira and participated in the Trumpet Jazz Festival accompanying important world trumpeters, such as: Tanya Darby, Rex Richarson, Georgina Jackson and Vince DiMartino.

In 2019, he participated in the 12th Jazz a La Calle Cultural Movement in Uruguay, an international meeting of musicians doing the closing show. The group also attended the 1st International Saxophonists Festival in Mogi das Cruzes, accompanying important Brazilian saxophonists: Josué Santos, Vitor Alcântara and Elias Coutinho. In 2020, before the pandemic, he participated in the 4th São Paulo Trumpet Academy, accompanying Scott Belck and Morris Nortcutt.

Check out the exclusive video produced by the band for the #MCBEMCASA program: