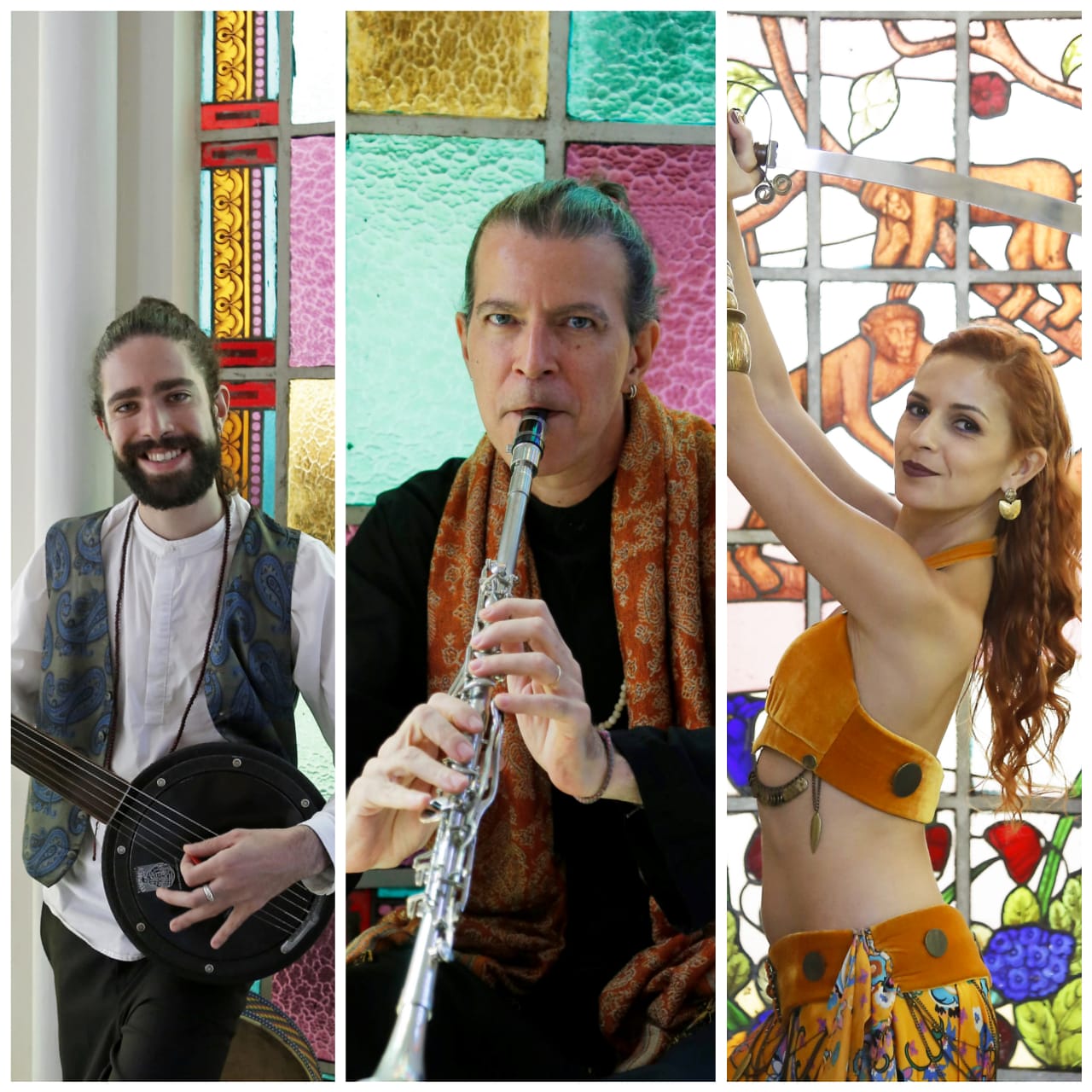 Coletivo Tarab is one of the honorees of the #MCBEMCASA campaign. The group is well known by the audience of the Music at MCB project, as they have performed several times on the Museum stage.

Through the research of multi-instrumentalist, composer and arranger Mário Aphonso III with the music of the world, a musical journey begins that connects strands and cultures through modal music from the Middle East, Turkey, Mediterranean and Balkans, to the Arab world and music Brazilian instrumental.

Within the study of theory, the practice of traditional repertoire and language are fundamental to a rich and complete experience. The need to share this research with musicians and friends has become a very enriching possibility. With the aim of creating bridges between cultures and establishing a poetic and artistic dialogue, the essence of the Tarab Collective was born.

Aiming to study, research and creativity through art, poetry, music and oriental dance, since 2010, this group has been responsible for artistic development and creation of fundamental groups in the World Music Paulistana Brasileira scene, in addition to a scenario of international meetings with renowned artists who promoted workshops, research, concerts and studies with collaborating students and musicians.

Watch the documentary made by the Soundpass Program – Instrumental Sesc Brasil with the group below:

About Mario Aphonso III
Mario Aphonso III has a solid musical trajectory and an international career in western and eastern music, having edited and released albums in Brazil, Europe, Asia and the East.

Acts in the complete family of saxophones, flutes, clarinets, keyboards, percussion, in addition to several traditional instruments of oriental wind instruments such as Flans Bansuri, Ney, Nay, Kaval, Turkish Clarinet, Duduk, Sipsi among others. Seeking connections between Western and Eastern music, he founded and coordinates the Tarab Collective, which is dedicated to teaching and researching music from the Middle East, Sefaradi, Mediterranean, Balkans, instrumental and Brazilian Regional music and their languages.

On November 15, 2017, he was awarded the Federal title of Commander of the “Order of Carlos Gomes” and on May 13, 2018 to the honor of the cultural attaché medal of the UN International Peace Forces in recognition of a work of thirty-five years of research and studies with the world’s cultural music.

Currently, he directs the projects Mutrib, Yaqin Ensemble, Orkestra Bandida, Zikir Trio, TarabJazz, Fanrarra Rumalaj, Quintet Instrumental and as a musician and instrumentalist he integrates diverse formations and musical groups, in addition to acting in the didactic, cultural formation and research areas.

Live
To get to know the group’s work better, watch the 12th of July, Sunday, at 17h, the live that will feature songs from projects that were relevant, passed and are part of the history of the Tarab Collective such as: Zikir Trio, Orkestra Bandida, Yaqin Ensemble , TarabJazz and Mutrib.
Broadcast at 5:00 pm: Facebook / collectivotarab and Instagram @coletivotarab