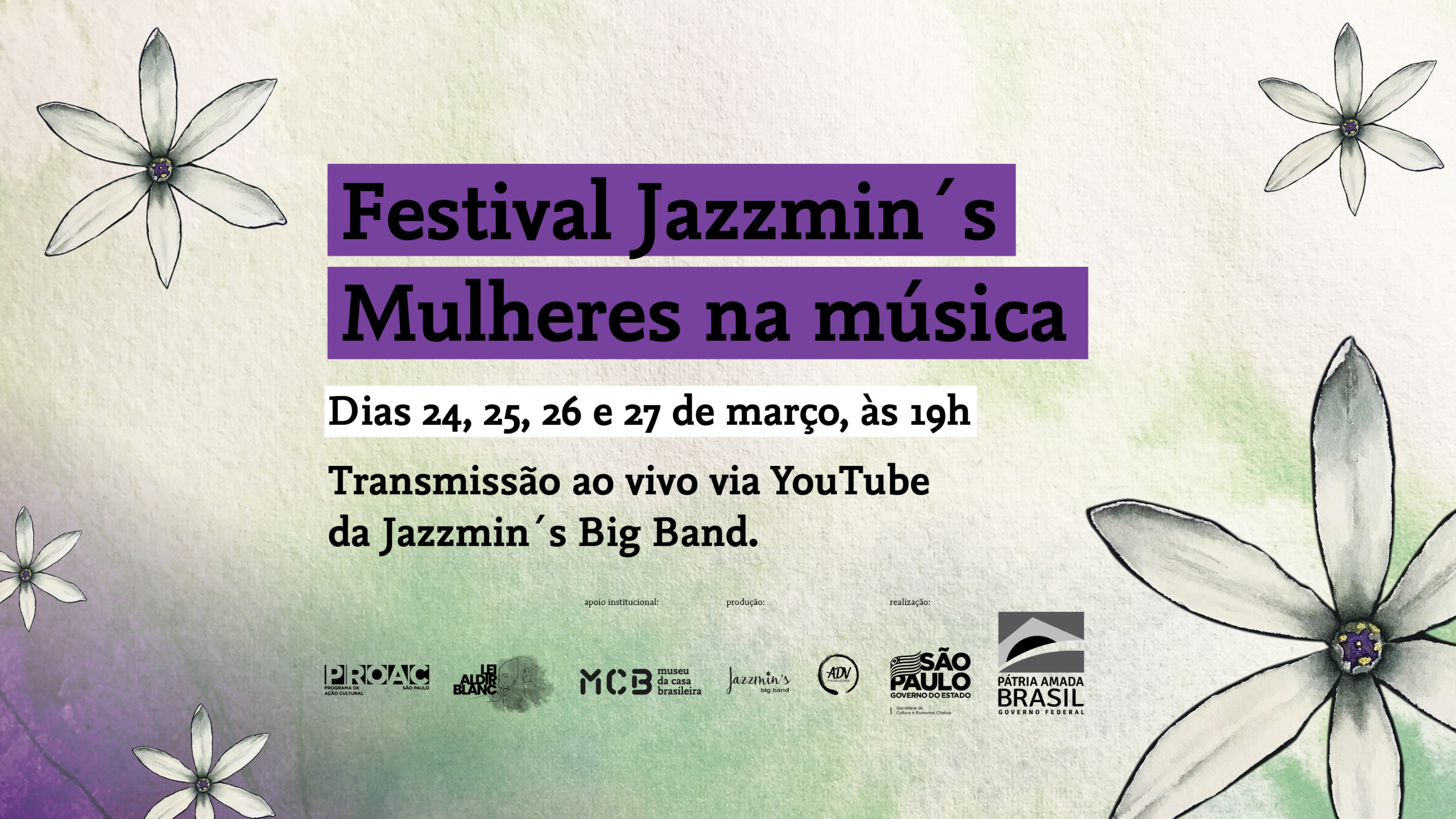 The Jazzmin’s Festival brings musical performances, lectures and round tables to the public for four days.

In celebration of women’s month, the Museu da Casa Brasileira – an institution of the São Paulo State Secretariat for Culture and Creative Economy – institutionally supports the Jazzmin’s: Women in Music Festival, which takes place between the 24th and 27th of March – always from 7pm on the band’s Youtube.

Jazzmin’s Big Band is a music group partner of MCB and composed of 17 women who have been innovating in the music scene since 2016, when they consolidated their pioneering work as an instrumental band exclusively for women in a mostly male universe. The formation still stands out for its particular sonority, which combines vibraphone, clarinet, clarone, horn and flutes with traditional instruments of a big band.

The festival has the ProAC 60-2020 Edital, Awards and Festivals axis and will be held over four days with a program full of national and author music, lectures and round tables that seek to raise awareness about the role of women in music and deepen the debates about gender inequality in the arts.

Check below the curriculum of the participants of the event:

About Paula Valente
Saxophonist and flutist of the São Paulo State Symphonic Jazz Orchestra. As a guest soloist, she played with the São Paulo State Symphony Orchestra (OSESP), at PROMS, an important festival that takes place in London and also with the Bari Symphony Orchestra (Italy). Graduated in composition and conducting at UNESP, with a master’s and doctorate from USP with specialization in themes focused on the language of popular music. His doctoral research deals with improvisation and choro, comparing styles and investigating the new directions of the Brazilian musical language, mainly related to improvisation. She also acts as a teacher at EMESP-Tom Jobim and artistic director and founder of Jazzmin’s Big Band.

About Lis de Carvalho
Pianist, arranger, composer, graduate in Piano with a postgraduate degree in Popular Music, she teaches Popular Piano and Harmony at EMESP and Faculdade Mozarteum in São Paulo. She played with Bocato, Celso Pixinga, Conrado Paulino, Lula Galvão, Mané Silveira, Paulo Moura, Raul de Souza, Ritchie, Roberto Sion, Sérgio Dias, Tetê Spíndola, Vânia Bastos, Walter Franco, among others. She participated as a pianist / keyboardist and composer for Grupo Kali and vocal group Tom da Terra, whose CD “Brasil Branco Negro” was nominated for the TIM Award. She has her compositions recorded on 8 CDs and 3 DVDs alongside Celso Pixinga, participation in the recordings of the CDs by Bocato, Faíska, Giba Favery, Léa Freire, Tato Mafuz. She recorded her CD Caminho de Dentro with Célio Barros and Giba Favery and recorded at Sesc Instrumental. Pianist and artistic director of Jazzmin’s Big Band.

About Camila Carrascoza Bomfim
Professor and researcher, she works in the area of ​​musicology and music education. PhD in Music (2017) by Unesp, she participates in national and international congresses, presenting academic works in several countries. She has been writing books in the area of ​​education since 2015, authoring a collection approved by the PNLD-National Program for Textbooks. She is a music teacher at Emesp – São Paulo State School of Music – Tom Jobim, member of the NOMOS research group, Social Musicology Center at the UNESP Arts Institute (CNPq), and double bass player at the Orquestra Jazz Sinfônica Brasil do Estado de São Paulo.

About Bel Santos Mayer
Social educator, master’s student of the Postgraduate Program in Tourism at the School of Arts, Culture and Humanities at USP (PPGTUR / EACH / USP) researching the relationship between Tourism, Mobility and Reading from a community library. Bachelor of Tourism, Degree in Mathematical Sciences, she has a specialization in Social Pedagogy. Since the 1980s, she has worked in non-governmental organizations facilitating the creation of Centers for the Defense of the Rights of Children and Adolescents (CEDECAs) and community libraries managed by young people. She was one of the creators and coordinators of the CEERT Education for Racial Equality Award. She is a social entrepreneur at Ashoka, a professor of “Reading Mediation” in the post-graduate literature for Children and Youth at the Vera Cruz Institute and coordinator of the Brazilian Institute of Studies and Community Support (IBEAC). She is co-manager of Rede LiteraSampa, finalist of the Jabuti Award 2019. She was curator of the 11th Edition of the São Paulo Literature Award. Awards received: Portraits of Reading in Brazil-2018; State of São Paulo for the Arts-2019; 67th APCA Award – São Paulo Association of Art Critics in the “Diffusion of Brazilian Literature” category.

About Viviane Louro
Lecturer in the music department at the Federal University of Pernambuco. PhD in Neuroscience from UNIFESP; Master in music from UNESP; Bachelor in piano from FAAM. It has 23 national awards among piano competitions, social projects and publications in congresses. Author of 6 books on inclusive music education and a HQ on neuroscience and music. At UFPE she coordinates a neuroscience league and post and an extension project for the mental health care of the music student.

About Graziela Bortz
Professor in the Music Department at the Institute of Arts at Unesp. She develops research funded by Fapesp and ALWAYS (England) on the cognitive and social skills of young people and children trained in music. She was a trumpeter (OSPA and Theatro Municipal de São Paulo) and pedagogical coordinator of Emesp -Tom Jobim.

About Eliana Monteiro da Silva
Pianist and Researcher-Collaborator at ECA-USP. As a professional, she seeks to promote women’s compositions in classical music. She integrates the groups “Sonora-musics and feminisms”, “Polymnia” and “MyGLA”, in addition to the Duo Ouvir Estrelas, with the singer Clarissa Cabral.

About Thais Nicodemo
Professor at the Music Department of the Arts Institute of UNICAMP, where he earned a Master and Doctorate in Music; she is responsible for the Popular Piano disciplines, which are part of the “Piano Laboratory” and Musical Perception. She works in research in the field of popular music studies, in the lines of “Musical Performance” and “Music, Culture and Society”. She is a pianist and composer who works in artistic works alongside musicians such as Juçara Marçal, Kiko Dinucci, Manu Maltez, Alessandra Leão, Tarita de Souza, among others.

About Vana Bock
Graduated from the Municipal School of Music, with teachers Gretchen Miller, Ricardo Fukuda and Antônio Del Claro. Former member of the Experimental Repertoire Orchestra, Camerata Fukuda, Symphonic Jazz Orchestra and head of suit for the Jundiaí Municipal Orchestra. Fellow of the Vitae Foundation specializing in cello and chamber music at the Ferenc Liszt Academy, in Budapest – Hungary. Cellist of the USP Symphonic Orchestra (OSUSP) and cello teacher at EMESP. Master in Musical Performance at ECA-USP.

About Cássia Carrascoza
First flutist of the Symphonic Orchestra of the Municipal Theater of São Paulo, of the Symphonic Jazz Orchestra and of the Open Camerata. She developed works at IRCAM, UC – Riverside, Pontificia Universidad Católica de Chile. Professor of the Music Department at FFCLRP- USP.

About Joana Queiroz
Clarinet player, saxophonist and composer. She has already shared the stage and / or the studios with names like Hermeto Pascoal, Arrigo Barnabé, Egberto Gismonti, Joyce, Ceumar, Virgnia Rodrigues, Carlos Aguirre and Gilberto Gil, among many others. Among the works she participates, the Quartabê group stands out. She joined the Itiberê Orquestra Família, recording three albums performing in cities in Brazil and Latin America. She participated in the recording of the album “Mundo Verde Esperança” by Hermeto Pascoal and group, and in shows for its release. There are 4 copyright CDs.

About Anette Camargo
Singer and pianist, she has erudite and popular training. Among her teachers are singer Jane Duboc, Lis de Carvalho and Ulisses de Castro. She is responsible for the design, arrangement and musical direction of her shows, whose repertoire includes her authorial compositions. She made presentations at the Ema Klabin Foundation, Cláudio Santoro Auditorium, SESCs, Blue Note Sp, Paranapiacaba Winter Festival, theaters, festivals and concert halls. She is the musical director of the Motown Songs – O Tributo project and arranger, composer, singer and pianist of the Tânia Maria Project.

About Catarina Domenici
Pianist, composer and researcher, Full Professor at the Music Department at UFRGS and professor at the Music Graduate Program. Recipient of CNPq and Chautauqua Institution scholarships, Master and PhD in Performance at the Eastman School of Music, assistant to Rebecca Penneys and received the Performer’s Certificate and the Lizzie Teege Mason Award for best pianist. She has 20 APCA awarded CDs and Azorean Trophies. Composer, with two nominations for best soundtrack to the Açorianos Dance Prize and nominated for the Açorianos Music Prize in the category of best classical composer by CD Homage: composers from Brazil and Italy. In the United States she taught at the Chautauqua Music Festival, SUNY at Buffalo, Eastman School of Music, Eastman Community School, Nazareth Music College and Finger Lakes Community College. She was the first President of the Brazilian Musical Performance Association (ABRAPEM).

About Julia Teles
Composer, sound editor and thereminist. Her works include composition of experimental music, improvisation, soundtrack for films and theater, and sound finishing for films. She was part of the collective NME, which between 2011 and 2018 produced several concerts and an online magazine (linda) on electroacoustic culture and experimentalism. After completing her degree in electroacoustic composition from Unesp, she took a composition course on analog support with Annette Vande Gorne, in Ohain, Belgium. In 2020, she completed a postgraduate degree in Music and Image at Faculdade Santa Marcelina, and is currently pursuing a master’s degree in the TIDD program at Puc-SP. Also in 2020, she released the album “Teia”, in partnership with Inés.

About Patrícia Lopes
Brazilian composer and pianist, composer of the song cycle O Feminino Em Pessoa and the instrumental song cycle Jardim Das Flores. She won a songwriting award for the LunArt Festival in Madison, USA in 2020 and for the Music and Stars Awards for the video that makes up this cycle.

About Julia Tzumba
Graduated at the UFMG University Theater, in Journalism at PUC Minas, master and doctoral student in Performing Arts, singer and percussionist, Júlia began her artistic studies at the age of 10. She is an actress at the Burlantins Company and one of the creators of the Benjamin de Oliveira Exhibition. She is also a member of the Coletivo Negras Autoras, acting as a composer, singer and instrumentalist. He is conductor and teaches percussion classes at the Associação Cultural Tambor Mineiro and was part of the cast of musicals: “Elza”, “The Frenetic Dancin Days”, “Oratório”, “NEGR.A”, “ERAS”, “Clara Negra”, “ Madame Satã ”,“ Zumbi ”and“ O Negro, Flor e Rosário.

About Jazzmin’s Big Band
Group idealized by saxophonist Paula Valente and pianist Lis de Carvalho who, inspired by their experiences as teachers at EMESP, realized the need and importance of opening spaces for female expression within instrumental music. It appeared at the end of 2016 during the 7th edition of the Festival Jazz na Fábrica at SESC Pompeia and became a pioneer in creating an exclusively female formation. Bringing together 17 instrumentalists from various musical trends and from different generations, in 2018, they were winners of the MUSIC PROFESSIONALS AWARD in the category ‘Orchestras’. In March 2019 the TUCCA Serie International Concerts opened with the Israeli clarinetist Anat Cohen Winners ProAc Edital SP – CD recording and circulation and in October 2020 they were invited to participate in the 2nd Rio Montreux Jazz Festival.

About MCB
The Museum of the Brazilian House, an institution of the Secretariat of Culture and Creative Economy of the State of São Paulo, has been dedicated, for 50 years, to the preservation and diffusion of the material culture of the Brazilian house, being the only museum in the country specializing in architecture and design . The MCB’s program includes temporary and long-term exhibitions, with an agenda that also includes educational service activities, debates, lectures and publications contextualizing the museum’s vocation for the formation of critical thinking on topics such as architecture, urbanism, housing, economics creativity, urban mobility and sustainability. Among its numerous initiatives, the Design MCB Award stands out, the main segment award in the country held since 1986; and the Casas do Brasil project, to rescue and preserve memory about the rich diversity of living in the country.