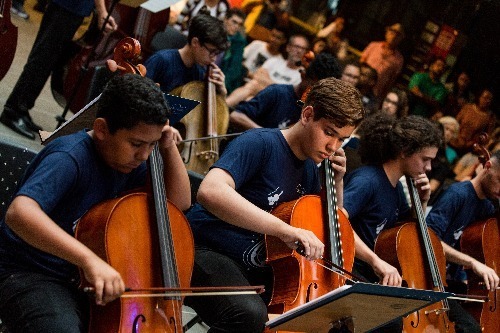 The Museu da Casa Brasileira (MCB), an institution of the Culture Secretariat of the State of São Paulo, will host the Orquestra Instituto GPA on its stage to commemorate the anniversary of the city of São Paulo, on January 25, at 11am, with free admission .

The presentation will be realized by the students governed by the teacher Daniel Misiuk and by the teacher and artistic director Renata Jaffé. The concert will have a varied repertoire, which makes a tour of national and international music. From Billy Blanco, who opens the show, passing by Green Day, and, to close, the classic ‘Train of the Eleven’ by Adoniran Barbosa.

Since its inception in 1998, the GPA Institute, GPA’s social arm, has changed the lives of more than 15,000 young people through music.

The Museu da Casa Brasileira, an institution of the São Paulo State Department of Culture, is dedicated to the preservation and diffusion of the material culture of the Brazilian house, being the only museum in the country that specializes in architecture and design. MCB’s program includes temporary and long-term exhibitions, with an agenda that also includes activities of the educational service, debates, lectures and publications contextualizing the museum’s vocation for the formation of critical thinking in themes such as architecture, urbanism, housing, creative economy, urban mobility and sustainability. Among its innumerable initiatives, the MCB Design Prize, the main award of the segment in the country, made since 1986; and the Casas do Brasil project, to rescue and preserve memory about the rich diversity of the country.

About The GPA Institute Orchestra

Since its creation in 1999, the Music Program of the GPA Institute has already changed the lives of more than 15 thousand young people, aged between 10 and 21 years. The students are guided by maestro Daniel Misiuk and the teacher and artistic director, Renata Jaffé, who contribute in the development of new musical talents to each new class. After the 2-year study cycle, outstanding students are selected to join the GPA Institute Orchestra. This opportunity allows for the improvement of the techniques learned in class, through presentations that enchant the audience wherever they go. Throughout the years, concerts have been held in hundreds of Brazilian cities and in countries of Latin America, North America and Europe. The GPA Institute is the social arm of the GPA and works to expand development opportunities for people to work by vocation and to promote social mobilization actions aimed at awakening empathy, awareness and social transformation. Founded in 1998, the GPA Institute has benefited more than 1.7 million people directly and indirectly through its projects.