The new literary work is related to the homonymous exhibition, open to visitors until December 12, 2021 at the MCB.

On October 13th (Wednesday), at 6 pm, the Museu da Casa Brasileira and Editora Olhares will perform the virtual launch of the book “Jean Gillon: artist-designer”. The event will be free and will take place on MCB’s YouTube, with the participation of the three authors of the work: Graça Bueno, Enock Sacramento and Giancarlo Latorraca. 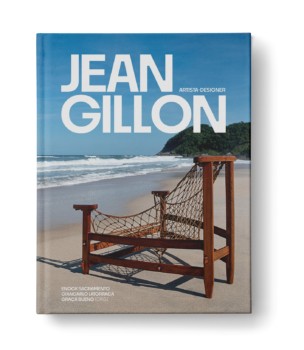 Purchases through the Editora Olhares website.
Technical information: 330 pages, 23×30 cm, hardcover.
Synopsis: The joint presentation of rosewood furniture and objects from the modern period and large tapestries – the best known facets of Gillon’s production – would be enough to surprise the reader. In the arts, however, he produced from an early age until the end of his life, in the most diverse media. And he had an epoch-making performance in interior architecture and scenography, even before arriving in Brazil. These are intertwined portraits of a multiple “artist-designer” and an intense life, which Gillon made a point of recording in detail, leaving us with the opportunity to revisit his path in this book.

About Enock Sacramento
Member of the São Paulo, Brazilian and International Art Critics Associations, he has extensive experience in juries and curatorships in Brazil, Latin America, the United States and Europe, and as the author of books, articles and exhibition catalogues. In 2004 and 2016, he received the Gonzaga Duque Award, from the Brazilian Association of Art Critics, and, in 2011, the Mário de Andrade Award for his career. He is a curator of the José and Paulina Nemirovsky Foundation.

About Giancarlo Latorraca
Giancarlo is an architect and technical director of the Museu da Casa Brasileira. He is currently a doctoral candidate at the Graduate Program of the Faculty of Architecture and Urbanism at USP, in the area of ​​Design, with a line of research on the theory and history of design under the supervision of Professor Dr. Maria Cecilia Loschiavo dos Santos.

About Grace Bueno
Graduated in Decorative Arts from the 17th to the 20th centuries by Sotheby’s Educational Studies, in London, where she worked at the auction house of the same institution. From 1988, he was responsible for international acquisitions for the family’s antique shop, and in 2002 he founded Passado Compound Século XX, a gallery specializing in Brazilian modernism, contributing to the rescue of his memory with exhibitions, curatorships, lectures and publications.