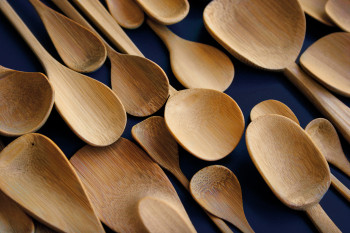 In the work, the chronicler and artist shares his ideas and experiences, working methods and passion for tools and bamboo

In his second memoir, “Viva a Produção Prazerosa”, the chronicler Alvaro Abreu narrates his trajectory as a maker of bamboo spoons, explains his working method and shares his passion for tools and bamboo, which he rediscovered in a period of forced idleness, almost three decades ago. The launch of the new publication takes place on Museu da Casa Brasileira, institution managed by Fundação Padre Anchieta, on October 15th, Saturday, from 2pm to 6pm.

At the launch at the Museu da Casa Brasileira there will be a workshop on the creation of bamboo spoons, held in conjunction with the Museum’s educational program, followed by an autograph table. To participate in the activity, you will need to register on the Museum’s website and the workshop will be free. “This is an action that encourages reflection on the different ways of producing objects, on the diversity of design, highlighting aspects of craftsmanship in the MCB programming”, comments Giancarlo Latorraca, MCB’s technical director.

“Viva a pleasant production” is an inspiring journey by Alvaro in search of reorienting life. Over the 264 pages, the publication produced by Editora Mandacaru, the columnist reveals how the craft of producing bamboo spoons, and the act of giving what he produces, led him to build his national and international reputation.

Going against the trend of digitalization and automation, Alvaro Abreu extols in this new book the pleasure of doing it with your hands – and doing it well. Unlike activities that demand demands, deadlines and haste, the author highlights the artisanal making of bamboo spoons as an occupation that gives pleasure, both during the production of the spoon and in the act of presenting them to those who use and appreciate them. It is a therapeutic movement of reconnecting with the present, of satisfaction in creating something useful and of receiving praise for the work done.

About the spoonbill and author
Alvaro Abreu is passionate about the human ability to produce with his hands. A restless, curious, active and nature-loving person, a survivor of two heart attacks, he accumulates the professions of chronicler, artist-craftsman-spoon maker, teacher, lecturer, production engineer and father. It was after he had his first heart attack that he began to use his manual skills to make spoons, an activity that requires little energy, little strength and simple tools, but great attention to detail, care and time. He estimates that he has produced more than 5,000 of them since 1995.
A native of Espírito Santo, Alvaro makes spoons daily, with any type of bamboo that he collects on his travels or gets from his friends. He does not sell his creations or charge fees for exhibitions. He loves making spoons for people who admire them and giving them away. Alvaro Abreu’s spoons are hand-carved from bamboo, using simple tools such as knives, sickles, gouges, sandpaper and shards of glass. In addition to this release, he has also published the book “Crônica do Meu Primeiro Infarction” (1996), is one of the authors of the anthology “Pandemonium: Brazilian chroniclers of the 21st century” (2022), is one of the spoon-bearers (and only Latin American) of the “Pandemonium” collection. The Book of Spoon Templates” (2021, The Spoon Crank), publishes a biweekly column in the newspaper A Gazeta, the main periodical in Espírito Santo.

About Editora Mandacaru
Mandacaru Design was created by the sisters Manaira Abreu, graphic designer, and Bebel Abreu, architect and producer, who complement each other in their expertise. The studio has an extensive network of collaborators providing photography, illustration, product design, translation, press relations, among others. As a publisher, Mandacaru produces books on demand, as is the case with Alvaro Abreu’s “Viva a Produção Prazerosa”. Other titles include the collection “With the word: the illustrators”, in which illustrators Roberto Negreiros, Orlando Pedroso and Ale Kalko created illustrated chronicles based on stories they lived through; “Before it ends”, by the artist João Galera; “In search of the submarine U-513” by Vilfredo Schurmann; “From inspiration to canvas” by David Schurmann; and the children’s activity book, “Playbook Wildlife From Brasil”, in English, produced for the Brazilian Pavilion of the International Exhibition ‘Expo Dubai 2021’. The company is also a Brazilian partner of What Design Can Do, a project based in the Netherlands and which also has a branch in Mexico City, Nairobi, Tokyo and New Delhi.