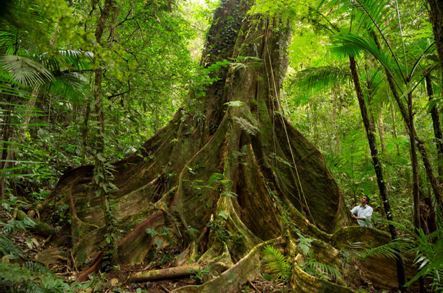 The publication, which is derived from the Remnants of the Atlantic Forest & MCB Collection, presents a visual history from the original primitive forest to what is left of the biome today, including traveler’s drawings of past centuries, photographs, records of deforestation and material remains , such as furniture (including MCB’s collection), constructions and tools.

In order to complement the contents to be presented, expeditions to different points of the Atlantic Forest, in search of the last large specimens, occurred in the period from July to September of this year in the states of SC, PR, SP, ES, BA and AL. In addition to Ricardo Cardim, the photographer Cassio Vasconcellos and the botanist Luciano Zandoná participated. The records of this work, also produced using drone, will be present in the book.

“The idea is to launch a seed for a future museum of the Atlantic Forest, a provocation so that we begin to form a necessary and unprecedented collection that tells the history of our forest for this and future generations,” says the author.

For the Museum, it is also a matter of drawing attention to environmental aspects directly or indirectly related to the production of furniture that has as its raw material the solid wood, so present in the history of our material culture.

About MCB
The Museu da Casa Brasileira, an institution of the São Paulo State Department of Culture, is dedicated to the preservation and diffusion of the material culture of the Brazilian house, being the only museum in the country that specializes in architecture and design. The MCB program includes temporary and long-term exhibitions, with an agenda that also includes activities of the educational service, debates, lectures and publications contextualizing the museum’s vocation for the formation of a critical thinking in themes such as architecture, urbanism, housing, economy urban mobility and sustainability. Among its innumerable initiatives, the MCB Design Prize, the main award of the segment in the country, made since 1986; and the Casas do Brasil project, for the rescue and memory about the rich diversity of living in the country. The museum collection can be visited in two long-term exhibitions The House and the City – Crespi-Prado Collection, which shows the residential use of the museum’s dwelling, and in the Remnants of the Mata Atlântica & MCB collection, which correlates the various wood typologies of the collection of MCB to the various native species existing in the Atlantic forest and presents a cut of the collection of the institution made up of furniture and objects representative of the Brazilian house from the 17th century to the present day.