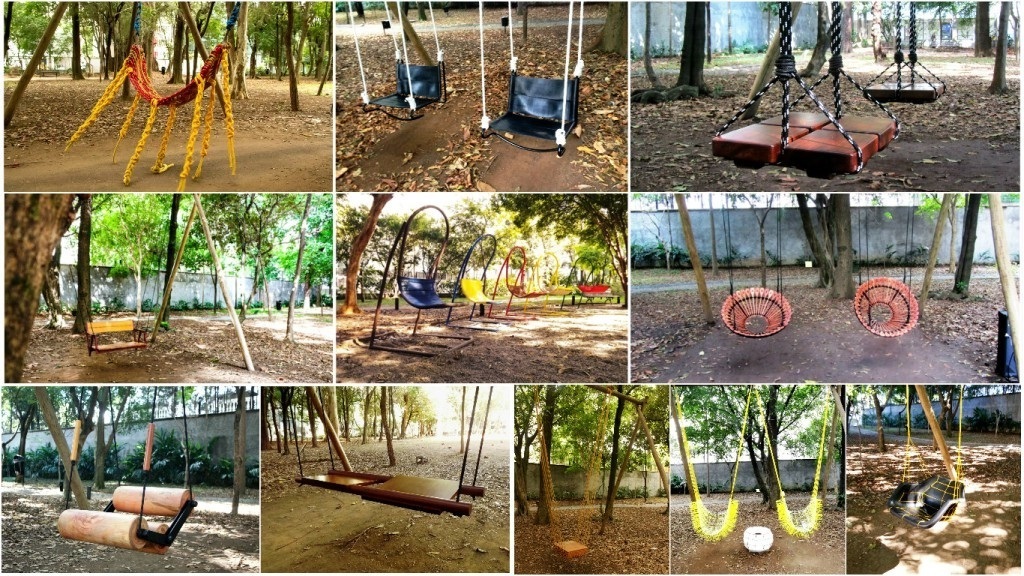 Since 2013, the Museu da Casa Brasileira, in partnership with BOOMSPDESIGN, has started a series of swing installations in the Museum’s garden, designed by Brazilian designers and architects from different generations. In August 2016, the new season of the Projeto Balanço MCB+BOOMSPDESIGN show featured a retrospective of the 11 swings and the launch of two new ones, signed by Ruy Ohtake and Hugo França.

The objective of the Project was to awaken the playful and affective memories of childhood, rescuing the games in parks, squares and other open environments. Despite being part of our imagination, the swing is a furniture somewhat forgotten by manufacturers and professionals. This cycle of installations favored the production of national design and living with nature. “The swing is one of the furniture items that I like the most, as it awakens many good memories of my life and because it has many possible uses. In my childhood, every house had a swing in the backyard, which was used by everyone, whether it was for playing, resting or making out. This is not so common anymore, but I hope that we return to this habit, which invites us to disconnect and bring us closer to nature”, commented Hugo França.

Opening of the Show

The “Bodocongó” balance by Sérgio Matos participated in the Balance Project cycle MCB+BOOMSPDESIGN; “Sobra”, by Zanini de Zanine; “Trama”, by Renata Moura; “Noar” by Carol Gay; “Cocar”, by the PAX.ARQ collective; and “Amor Perfeito” by Marcenaria Baraúna. Between November 2014 and April 2015, designer Paulo Alves presented the “Atibaia” balance sheet, created together with Luis Suzuki from the homonymous chair, a project developed by the duo that won 1st place in the furniture category at the 23rd MCB Design Award. Between April and June 2015, designer Alaner Espécie brought the “Migramach” balance sheet, developed in macramé weave. Between June and September of the same year, the “Ibira” balance sheet by the Tri Design studio was on display, made up of three Cumaru wooden cylinders, a certified raw material resulting from sustainable management. Before the “Ajuá” swing set, architect and designer Rodrigo Ohtake exhibited the “BC” swing at the MCB, made with a tubular steel profile and synthetic fabric seat.

The opening of the exhibition “Projeto Balanço MCB+BOOMSPDESIGN” was held together with the opening of two other exhibitions: “Mirim Design” and “Hugo França: Scales in Contrast”. The event was part of the Design Weekend calendar!

About BOOMSPDESIGN
Conceived by Roberto Cocenza, BOOMSPDESIGN – International Forum on Architecture, Design and Art, annually brings together renowned names in the national and international market to discuss architecture, design and art. The event brings to Brazil content and experiences highlighted on the world stage.

About MCB
The Museu da Casa Brasileira, an institution of the Secretariat of Culture and Creative Economy of the State of São Paulo, is dedicated to the preservation and dissemination of the material culture of the Brazilian house, being the only museum in the country specializing in architecture and design. The MCB’s program includes temporary and long-term exhibitions, with an agenda that also includes educational service activities, debates, lectures and publications contextualizing the museum’s vocation for the formation of critical thinking on themes such as architecture, urbanism, housing, economy creative, urban mobility and sustainability. Among its numerous initiatives, the MCB Design Award, the main award in the segment in the country, held since 1986, stand out; and the Casas do Brasil project, to rescue and preserve the memory of the rich diversity of living in the country.