On display from February to April 2016.

The Museu da Casa Brasileira, an institution of the Secretary of Culture of the State of São Paulo, presented, between February 27 and April 24, the exhibition Dutch Design Today: objects that indicate the house of tomorrow, held in partnership with the Consulate General of Kingdom of the Netherlands in Brazil. Curated by Jorn Konijn (Netherlands), the show brought together pieces of daily use through a cut of current Dutch production, with products that bring the solutions of the country’s designers to the challenges pointed out by the new configurations of living.

Derived from the exhibition “Contemporary Dutch Design”, held during the 2015 Brazilian Design Biennial, at Palácio Cruz e Souza, in downtown Florianópolis (SC), the show brought together objects that incorporate new technologies and solutions, presenting a new look at life everyday. “How do designers deal with these changing situations? Do they change the design of these professionals? And do designers offer new tools to support change? To what extent has this new domestic and social context changed their work? ”, Asked the curator.

Seeking to answer these questions, Konijn selected works such as the table whose top is a photovoltaic panel that captures solar energy; a bicycle made of reforestation wood; and a tea set with insect-inspired design.

“MCB promotes in its cultural program and through the annual editions of the Design Award the debate about the transversal character of design and its presence in everyday objects”, explains Giancarlo Latorraca, technical director of MCB. “The Dutch Design exhibition today brings relevant elements to this discussion, revealing contemporary solutions to universal problems and pointing out ways in the face of new technical possibilities and habitat configuration.”

Check out some records of the opening day of the show:

Some highlights in the media about the exhibition: 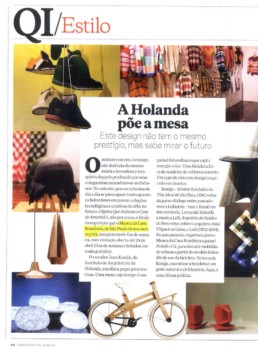 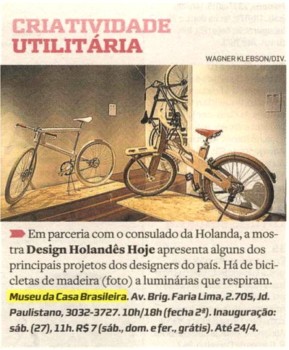 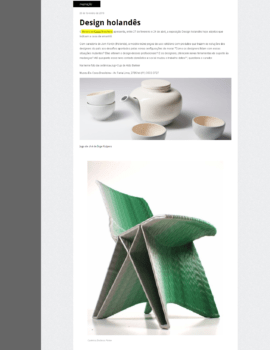 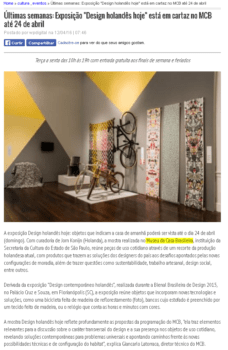 About Jorn Konijn
International freelance curator at the Netherlands Institute of Architecture (NAi), Jorn Konijn is the founding director of This Must be the Place, a cultural organization that operates in the field of the creative industries. He was curator of two Dutch participations in international biennials: in November 2011 with the exhibition Unsolicited architecture for BIA, in São Paulo, and Housing with a mission for the Shenzhen International Biennial, China, in December 2011. He was co-curator of the presentation in Rotterdam (Netherlands) of the exhibition “Lelé, architect of health and well-being”, alongside Max Risselada and Giancarlo Latorraca, and also of the Shenzhen Hongkong International Architecture Biennial, held in December 2013. In 2015 , was a curator at the MCB of the panel “Pedalá e Cá”, which discussed urban mobility based on the Dutch model of bicycle use.

About MCB
The Museum of the Brazilian House, an institution of the Secretariat of Culture and Creative Economy of the State of São Paulo, which celebrates its 50th anniversary in 2020, is dedicated to the preservation and diffusion of the material culture of the Brazilian house, being the only museum in the country specialized in architecture and design. The MCB’s program includes temporary and long-term exhibitions, with an agenda that also includes activities of the educational service, debates, lectures and publications contextualizing the museum’s vocation for the formation of critical thinking on topics such as architecture, urbanism, housing, economics creativity, urban mobility and sustainability. Among its numerous initiatives, the Design MCB Award stands out, the main segment award in the country held since 1986; and the Casas do Brasil project, to rescue and preserve memory about the rich diversity of living in the country.