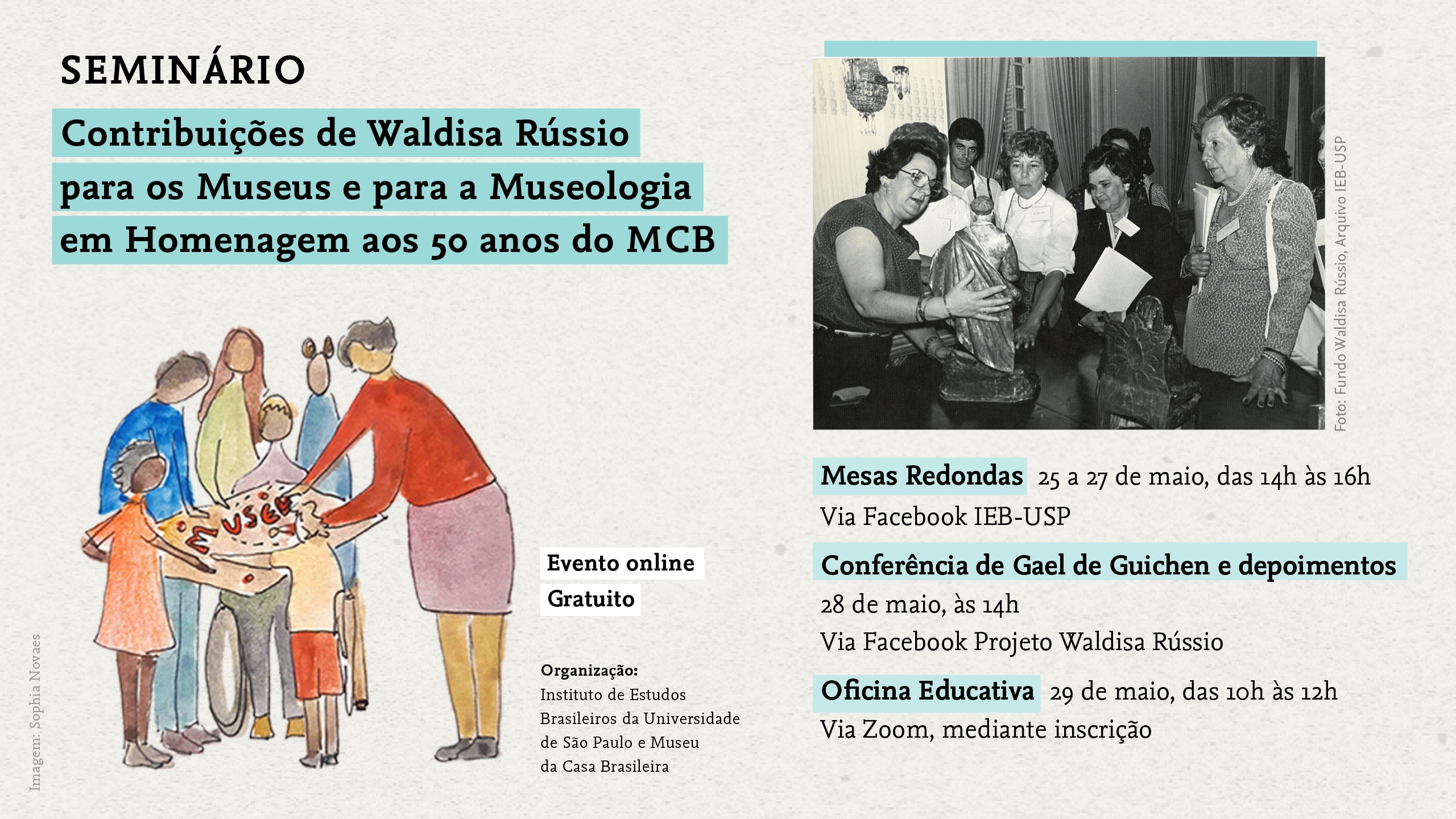 In 2021, the celebrations of the anniversary of the Museu da Casa Brasileira (MCB), an institution of the Secretariat of Culture and Creative Economy of the Government of the State of São Paulo, will be marked by a program carried out in partnership with the Institute of Brazilian Studies at the University of São Paulo Paulo (IEB-USP) who will reflect on the history and legacy of Waldisa Rússio, an important figure for MCB over the course of his 50 years who also served in assisting several museums nationwide and making feasible specialization in Museology in the Brazil.

The event will consist of a series of seminars that will be held from May 25th to 27th (Tuesday to Thursday), with live transmission on IEB Facebook, from 2pm to 4pm; in addition to a conference that will be available on the 28th (Friday), at 2:00 pm, on the Facebook of the Waldisa Project and a special workshop that will be conducted by Educativo MCB on the 29th (Saturday), from 10am to 12pm, via Zoom.

Seminar “Waldisa Rússio’s contributions to museums and museology in homage to the 50 years of MCB” | Roundtable: SEC / SP museums – new performances and reflections proposed by Waldisa Rússio and the museum technical group.

Seminar “Waldisa Rússio’s contributions to museums and museology in homage to the 50 years of MCB” | Roundtable: Training and research in museums.

Seminar “Contributions by Waldisa Rússio to museums and museology in homage to the 50 years of the MCB” | Round table: Education and accessibility in museums.

Conference “Waldisa’s pioneering in the preservation of heritage and teaching in Brazil” with: Gael de Guichen – ICCROM Rom.

Recorded testimonials by: Nayte Vitielo (ex-student Specialization Course in Museology at FESP-SP and Museologist at the Museu do Instituto Biológico), Fábio Soares (architect who served as a child monitor at the Children’s Workshops and Exhibition at the Museu da Indústria at Metrô São Bento ), Tânia and Miriam Camargo Guarnieri (nieces of Waldisa Rússio).

*Recorded programming. It will be available in the profile.

Online workshop | Imaginary Architectures: how do you imagine a children’s museum?

WALDISA’S INFLUENCE ON MUSEUMS AND MUSEOLOGY

Born in São Paulo, Waldisa Rússio (1935-1990) graduated as a lawyer from the Largo São Francisco Law School (USP), took a public exam and joined the public administration staff of the State of São Paulo. In this sphere, she started her career in the area of ​​Culture.

At the then Department of Culture, Sports and Tourism, he participated in the creation and structuring of the Museum of Sacred Art (1969), the Museum of the Brazilian House and Museum of Image and Sound (1970) and, of the Casa Guilherme de Almeida (1979), the latter by designation of Ernani Silva Bruno. Through these experiences, she established contact with professionals from the most diverse areas that make up the work in museums and provided assistance to several museums in Brazil.

At the end of the 1970s, she organized the Museology Specialization Course in partnership with MASP and the São Paulo School of Sociology and Politics Foundation; the first at postgraduate level to be taught in the state and in the country. As coordinator of the course and director of the Institute of Museology of São Paulo, she made internships, scholarships and work opportunities possible for many of the students.

In addition to her role as a teacher and technician in public administration, Waldisa was one of the most important theorists in the field of national and international museology, being responsible for conceptualizing the Museal Fact and defending more democratic museums.

Among the subjects discussed during the celebrations on the eve of the 51st anniversary of the MCB, is the creation of the MCB, which had Ernani Silva Bruno (1912 – 1986) as its first director, appointed in November 1970. In addition to being responsible for the current denomination from the institution, between 1971 and 1979, he conceived and developed the “Binder of the Equipment of the Casa Brasileira” or as he became known, Ernani Silva Bruno Archive. The namesake archive is a unique and highly relevant collection for understanding the materiality of the Brazilian home that can be physically acquired and found on the MCB website. Composed of about 28,900 files divided into 24 subjects (Water supply; Food; Toys; Construction: materials and techniques; Domestic customs; among others), it covers the four centuries (1500 to 1912) of Brazilian history, referring to sources such as: chroniclers, travelers, inventories and wills, in addition to national literature.