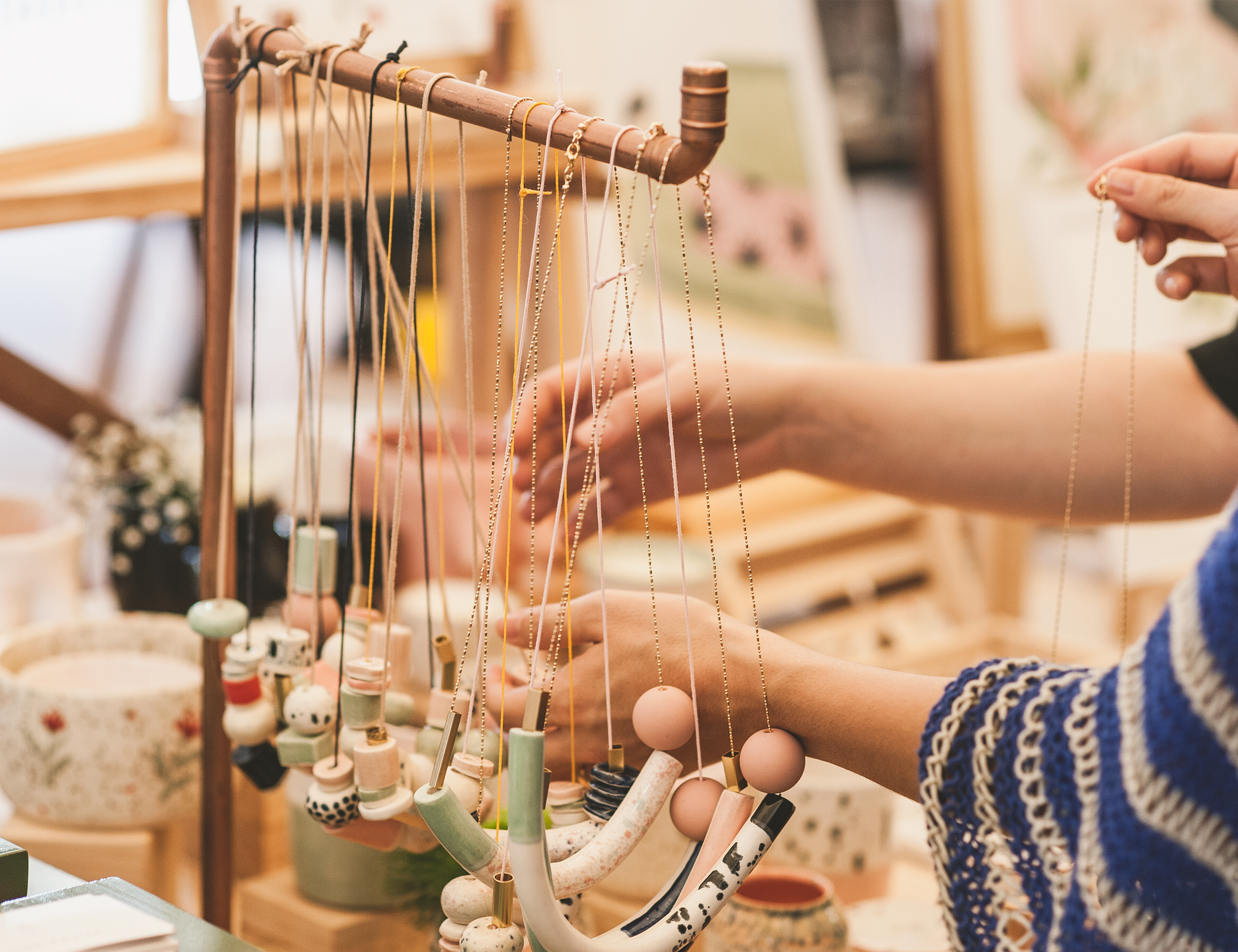 With the purpose of valuing and stimulating the work of the contemporary artisan, the seventh edition of the Manual Market is held at the Museu da Casa Brasileira, an institution of the Culture Secretariat of the State of São Paulo, in partnership with Floristas Produções.

The event, which will feature more than 100 exhibitors, among design, art, fashion, wellness and gastronomy, all with work by authors, workshops and gastronomic plaza, will be held on 2 and 3 December, Saturday and Sunday, from 10am at 8 pm, with free admission.

“Our expectation is to continue to receive the faithful public and also new visitors to a great Christmas party for the two-year consecration of the Manual Market at MCB, offering the best of the manual network curatorship”, comments Daniela Scartezini, one of the founders of Florists Productions.

Selected by a curator who looks for sustainable and small-scale products, more than 700 exhibitors, including crafts designers, shows and workshops, have passed through the seven editions of the fair in the Museum of the Brazilian House.

“MCB, the country’s only museum dedicated to design and architecture, opens its doors once again to the Manual Market, strengthening artisan production and encouraging creativity and entrepreneurship,” says technical director Giancarlo Latorraca.

Among the exhibitors of the seventh edition of the Manual Market at the Brazilian House Museum are:

– Throughout the day: Erê Lab – company that develops playful objects for the participation of children in urban planning.

OFFICES
– From 12 a.m. to 1:30 p.m.: Workshop of Natural Smokers, with João Diel – First Leaf
The charismatic João Diel, creator of the First Leaf brand, will teach the participants to make their own natural smoker to leave any environment pure, smelling and discharged.

– From 4:30 p.m. to 6 p.m.: Coado Coffee Shop, with Daniel – OCabral
Preparation techniques, with methods used in your day to day, to make the most of your homemade coffee. Topics such as grain quality, process and how to prepare your favorite coffee in the best way, making the most of what a good coffee bean can offer.

SHOWS
– From 1 pm to 2 pm: Music | Guegué Medeiros
Graduated in Music Degree from the Paulista Faculty of Arts (FPA), Guegué Medeiros is a producer, musical director in shows and musicals. He has participated in works and divided the stage with artists such as Gilberto Gil, Arnaldo Antunes, Lenine, Zeca Baleiro, and has already participated in festivals such as Montreaux Jazz Festival, Womad Singapore, Brazil Day Festival, among others.

– From 3.30 pm to 4.30 pm: Music | New Orleans Jass Band
New Orleans Jass Band has been playing authentic traditional and dancing jazz for 51 years, just as it was in the early 1900s in New Orleans. He is one of very few groups of the genre existing in Brazil, and his talent and fidelity to the musical style are recognized by all the country and even in the cradle of the jazz, the USA. In the repertoire, themes from the 1920s, which were used as soundtracks of woodpecker drawings, Tom and Jerry, among others.

– From 6pm to 7pm: Music | Diego Moraes
Known for the project Not Recommended, singer and composer Diego Moraes has been gaining space and prominence in the new scene of independent music with his praised voice. Diego Moraes was known by the general public with the participation of the Ídolos program in 2009 and launched the CD / DVD of re-readings of MPB classics, by EMI. With its first album of music that has a musical production of Edu Capello, # Équeeuand de Bus, the audience is faced ironically in a daily life, full of joys, social problems and solitude, with this gift of living smiling and dancing with all this antithesis.

– Throughout the day: Erê Lab – company that develops playful objects for the participation of children in urbanism.

– From 11:00 a.m. to 12:30 p.m.: Natural Cosmetics Workshop with Manu, Sal do Beija Flor In this workshop, aimed at all those who would like to learn how to produce their own cosmetics, will be talked about the benefits of using cosmetics without chemical elements, healthier and aligned to a green lifestyle, a bit of aromatherapy and where to buy the raw material and the necessary utensils. In addition, participants will make some recipes from the KISS-FLOWER SALT line, such as Exfoliating, Deodorant, Botanical Perfume, Lip Balm and we will learn how to make delicious scalping feet.

– From 2:30 p.m. to 4:00 p.m. Children’s Paint Shop on stools with Ju Amora The artisan will teach children from 4 to 10 years to paint wooden stools with non-toxic paints. – From 5:00 p.m. to 7:00 p.m.: Crochê Workshop, with NaLã Collective Participants will have contact with the first steps to begin crochet work: low, high and free. And you will be free to create. SHOWS – From 1 pm to 2 pm: Music | Ideogram – Daniel Grajew and Emílio Martins The idea of ​​the Ideogram duo is to unite different musical elements, starting from Brazilian rhythmic matrices to create zones of intersection with Indian, Bulgarian and African music, as well as jazz and classical music, with authorial themes and re-readings of traditional songs in the instrumental music format. The duo is formed by Emilio Martins on percussions and Daniel Grajew on piano, keyboard and accordion.

– From 3:30 p.m. to 4:30 p.m.: Children’s Music | Troupe Foot of Stories The girl and her friend Mané Popcorn immerse themselves in the world of books and letters. Together they discover that letters form words, words form texts, texts make history and they tell what the imagination wants. It is a world without limits. The Troupe Pé de Histórias is a group of theater and music, which is based on creating the direct play with the audience. They mix languages ​​like music, circus, puppets, shadows and magic, commanding a delightful imaginative adventure. Creation and direction: Naya Sá and Tucci Fattore.

– From 6pm to 7pm: Music | Acatum Group of percussion and voices that have as main tool the musical improvisation guided by signs that establish the creative dialogue between the musicians and the conductor. Music is built through a system of pre-set bodily gestures to drive collective creation. The group has members from different Latin American countries, such as Argentina, Uruguay, Chile and Brazil, a culture broth that results in a unique sound and incorporates different languages, such as those developed by Fernando Barba (Barbatuques) in Brazil through percussion and the signal system created by Santiago Vazquez, Argentine musician and founder of the group “La Bomba del Tiempo”.

The Museu da Casa Brasileira (MCB), an institution of the São Paulo State Department of Culture, is dedicated to the preservation and diffusion of the material culture of the Brazilian house, being the only museum in the country specialized in architecture and design. The program includes temporary and long-term exhibitions, as well as an agenda with debates, lectures and publications that contribute to the formation of a critical thinking in diverse themes such as urbanism, housing, creative economy, urban mobility and sustainability. Amongst MCB’s many initiatives, the MCB Design Prize, the main recognition of the segment in the country, since 1986, and the Casas do Brasil project stand out, which aim is to rescue and preserve memory about the diversity of the Brazilian’s dwelling.

About the Manual Network

The Manual, created by Floristas Produções, is a network that brings together small entrepreneurs and new creators, providing business environments, qualification and relationship. It is a tool that encourages and reaffirms the artisan, the author, the creator. Composed mainly of women, the network believes in the female potential as a transformative agent, and in the capacity to build a better future through the valorization of manual labor. The Manual Network establishes and is related to physical events, such as Manual Market, workshops and redemanual.com.br website.