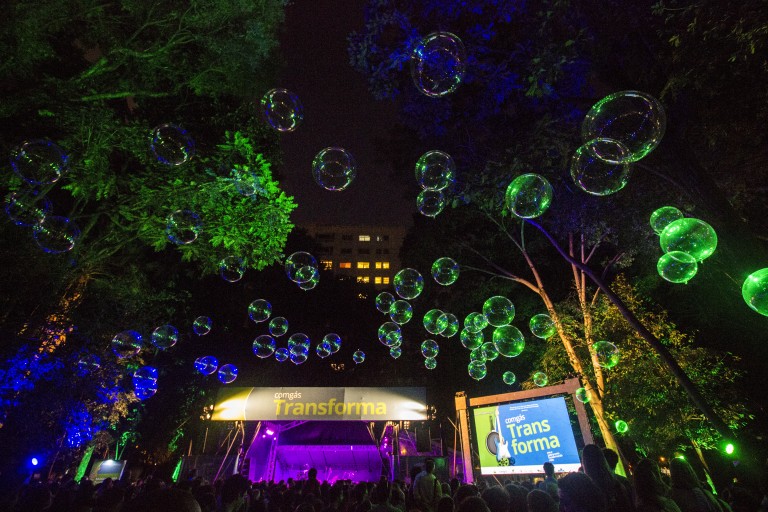 On April 7, Saturday, from 10:00 a.m. to 8:00 p.m., the Ministry of Culture and Federal Government, Order and Progress, the Museu da Casa Brasileira, institution of the Culture Secretariat of the State of São Paulo, and Marolo Produções will perform the first edition of the Comgás Transforma festival. With free admission, families can participate in activities with children, lectures, workshops and even watch shows and documentaries.

The day will start dedicated to the small ones, with children’s workshops of balloon sculpture, artistic painting and facial drawing. The program will be followed by a gastronomic fair throughout the day, renowned chefs’ workshops and music presentations with groups such as the Small Orquestra Interativa, Lov.Trio, DJ Dre Guazzelli, Bixiga70 and Hermeto Pascoal.

The purpose of the event is to share experiences and value who transforms reality through art and food. There will be an exhibition with videos of 15 characters who have in common the view on gastronomy as an instrument of transformation. The videos are directed by Luiz Antônio Pilar, director of documentaries awarded as “Remoção” and novelas as the remake of “Sinhá Moça”, winner of the Emmy.

Four renowned chefs will give lectures and conduct gastronomy workshops, re-reading the dishes of the characters in each video. This is the case of Rodrigo Oliveira, who is ahead of the Mocotó restaurant and his “Northeastern cuisine from father to son since 1973”. Who will also be present is Erick Jacquin, chef who has been in Brazil since 1994. For four years, Jacquin commanded Le Coq Hardy and then took over the kitchen of the Café Antiqe, specializing in French cuisine. With 10 years of Brazil, he inaugurated La Brasserie Erick Jacquin. He is currently one of the judges of the Master Chef Brasil program.

The stage design project of the event is signed by the miner Keller Veiga, set designer of TV Globo since 1980 and responsible for works awarded novels such as “My Little Piece of Ground”, “Velho Chico” and “God Save the King” (current novel at 7:00 p.m. ), among others.

The project is carried out by the Ministry of Culture and Federal Government, Order and Progress, by the Brazilian House Museum and by Marolo Produções, via the Rouanet Cultural Incentive Law, sponsored by Comgás.

About the musical attractions:

Hermeto Pascoal
Known as “the wizard” or “the wizard”, the Alagoan Hermeto Pascoal is considered by most of the musicians as one of the greatest geniuses in activity in world music. In 2018, turns 82 and continues to dance and jump on stage like a boy. Poly-instrumentalist, he is famous for his ability to extract good music from anything from kettles and plastic toys to people’s speech. Join in there keyboard, piano, flute, bass, accordion, bass 8 bass, garish and a plethora of instruments that plays alongside his legendary group, training that has maintained since the 1970s. Throughout his career, has released more of 35 albums and participated in countless recordings.

Pequena Orquestra Interativa
POIN, Pequena Orquestra Interativa, is a parallel work of members of Cia. Maria Hair, septet formed by musicians who play guitar, flute, sousafone, acordeon, violin and percussion. The main feature of the show is interactivity with the audience, which is included in different forms in all the instrumental musical numbers presented, through actions that explore rhythm, tuning, motor coordination and memory. The sound is a mixture of music from the Balkans, klesmer, crazy waltzes and gypsy music.

Bixiga70
Formed in 2010, the São Paulo big band releases their third album, which as in the previous two answers only for “Bixiga 70”. Non-title, sense of continuity, to emphasize that it is not a creation at every point, but a constant line of creation and evolution – conceptual, artistic, musical, spiritual, personal, of the ten musicians that form the band. Ten musicians in their personal identities, within a collective that includes jazz, funk and Afro-Brazilian music, from a range of strong influences that go through dub and reggae, cumbia and carimbó, ethio-jazz and samba-jazz.

Lov.Trio
Three violinists dedicated to mixing erudite and pop music. The band, formed by Thais Moraes, Fernanda Garcia and Jessica Karoline, makes private re-readings for hits by Coldplay, Michael Jackson, Calvin Harris, Bruno Mars, Calvin Harris, Ed Sheeran and a rock and roll version for a Vivaldi classic. The trio is preparing for the recording of their first CD, which will be available on the main platforms in Brazil.

DJ Dre Guazzelli
Dre Guazzelli has more than 25 international tours in the curriculum and began playing at age 18 and in 2005 he created INNER multi.art: a festival that brings together more than 100 artists and around 4 thousand people in an environment that mixes art, culture and music . From the success of this party, in 2011 opened INNER entreprises, an event platform that connects people, artists and brands. The project features parties such as Saturday Dre Afternoon, in which he plays in a certain place for 7 hours until sunset, in addition to the AWE New Year’s Eve in Caraíva, Chocolate, Groovelicious, Grill and LEEDS. His company is still dedicated to art with INNER Gallery and initiatives focused on yoga and meditation, yoga escapes, high prana and rooftop yoga.

About Comgás
The Gas Company of São Paulo (Comgás) works to be the best energy alternative for people, companies and society, offering services and solutions that anticipate the future. Comgás has been undergoing a process of great evolution. More than a natural gas distributor, Comgás is today an energy solutions and services company. With uninterrupted supply and 24-hour service, Comgás serves more than 1.7 million customers in its concession area in the State of São Paulo: the Metropolitan Region of São Paulo, the Administrative Region of Campinas, the Baixada Santista and the Paraíba Valley . The Company has more than 15,000 kilometers of distribution network in 88 municipalities, supplying the industrial, commercial, residential and automotive segments with natural gas, in addition to enabling cogeneration projects and supplying gas to thermo-generation plants.

About Marolo Productions
Marolo Produções was born from the dream of bringing culture to the small town of Três Pontas, south of Minas Gerais, and in 2009 held its first project, the Music of the World Festival, today in the 7th edition. Since then, Marolo has culture throughout the country, without ever losing its origins. Keeping his office in Três Pontas and headquartered in São Paulo, he held cultural events in the 5 Brazilian regions, in more than 90 cities, from major cities to the remote interior of Brazil. Idealizer and director of projects such as the BB Blues and Jazz Festival, which takes place in 6 Brazilian capitals, she conceived and performed the 70-year career of singer and composer Milton Nascimento, the “Circuito Brasil Musical”, the project “Concertos Ihara “, which unites an orchestra with country music from the roots, the Cultural Winter of Gaucho Traditions, and the” Mother of Two “theatrical performances.