LECTURE | DESIGN: DID WE GET WHERE WE WANT? AND NOW? 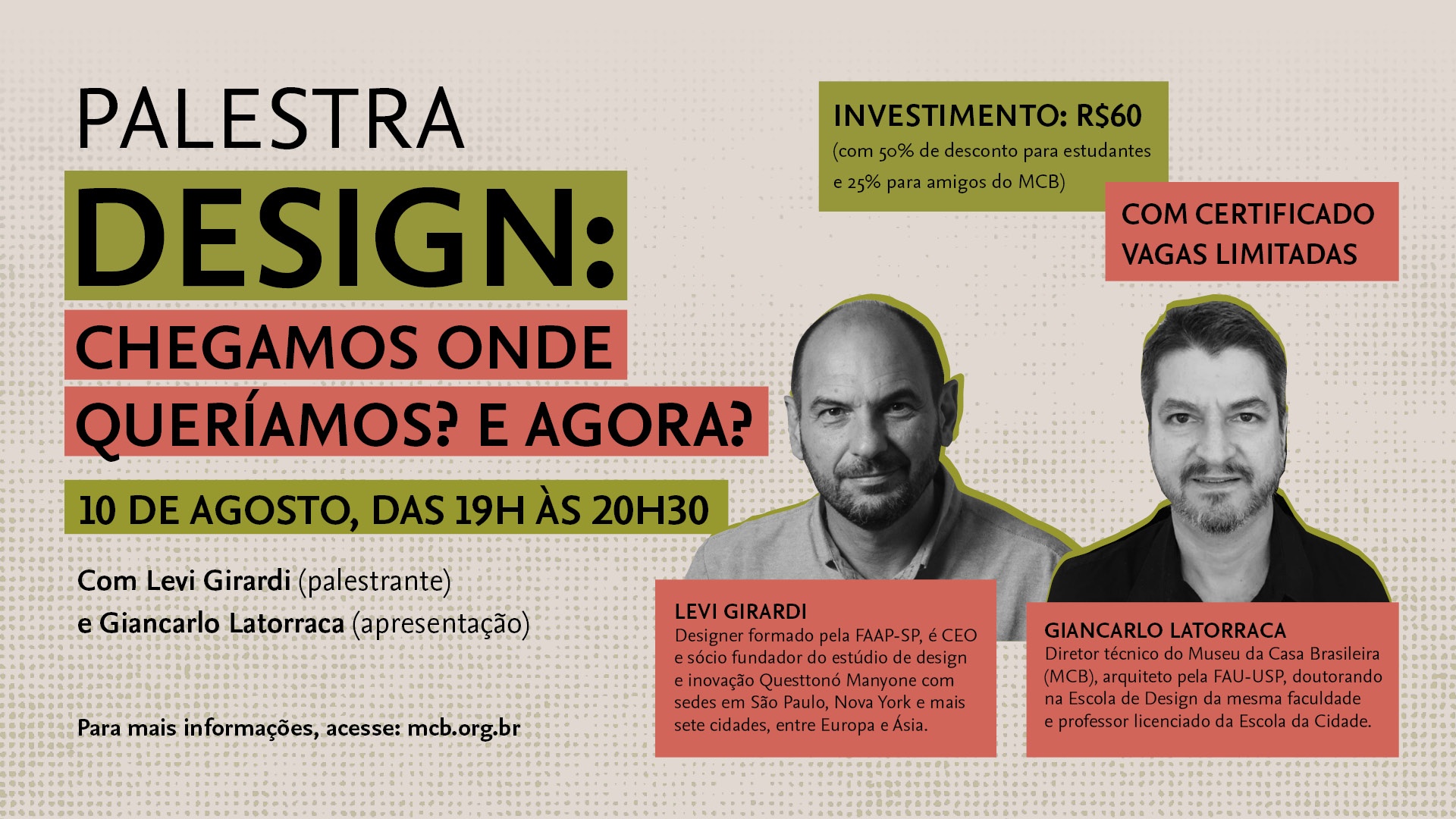 Programming will address new perspectives for the profession

On August 10 (Tuesday), at 7 pm, the Museu da Casa Brasileira – an institution of the Secretariat of Culture and Creative Economy of the State of São Paulo – will hold the lecture “Design: Have we got where we wanted? What now?”, with the participation of designer Levi Girardi and presentation by the technical director of the MCB, Giancarlo Latorraca. The virtual event will take place live via Zoom and will be exclusive to subscribers. The initiative is an opportunity for students and professionals in the field who want to update themselves on the job market in the segment.

Design: Did we get where we wanted to? And now?

Design as a discipline has changed radically in recent years, both abroad and in Brazil. In addition to being fundamental for the conception of new products, brands and services, it has been positioning itself as a fundamental strategic activity linked – also – to business, reaching a level of vital importance for corporations, a position long sought after by the entire category. However, this new place requires new skills, visions and entrepreneurial behavior, which was not always the focus of designers. How to deal with this new and challenging scenario? That’s what we’re going to discuss on this schedule.

Lecture | Design: Did we get where we wanted to? And now?

*The schedule will NOT be recorded

A designer graduated from FAAP-SP, he is CEO and founding partner of the design and innovation studio Questtonó Manyone, based in São Paulo, New York and seven other cities, between Europe and Asia. Levi directs a team of designers, researchers, strategists and other transdisciplinary professionals who for 28 years have been developing projects focused on the integration of products, services and brands through the Systemic Design methodology, balancing technical, economic and commercial feasibility of projects, always centered on meeting people’s needs. It serves companies such as Ford Motor Co., Anheuser Bursch Inbev, Natura, Ambev, Samsung, Energisa, in addition to participating in the promotion of StartUps through the company’s Venture Design structure. Over time, he has won the most important design awards in the world, in addition to having been a judge of awards such as the Museu da Casa Brasileira Design Award and the iF Design Awards.

Architect at FAUUSP, doctoral candidate in the Post-Graduate Program in Design at the same college and licensed professor at Escola da Cidade. He collaborated with Lina Bo Bardi, Paulo Mendes da Rocha and with the Brasil Arquitetura office. He worked at the Lina Bo and P.M. Bardi Institute from 1993 to 2001, developing editorial projects and national and international exhibitions such as mostraDesign in impasse at the Milan Triennale’ (1998). He carried out furniture and interior design with Marcenaria Baraúna and executed numerous exhibition projects in partnership with the firm Apiacás Arquitetos (2001-2010). He is currently Technical Director of the Museu da Casa Brasileira, developing with his team an extensive review of the institution’s collection and carrying out, among others, research and exhibition projects such as the exhibition ‘Ways of exhibiting: exhibition architecture by Lina Bo Bardi’, organized by occasion of the celebration of the centenary of the architect’s birth, APCA-2014 award, category “Frontiers of architecture”, modality “Architecture and Urbanism”.