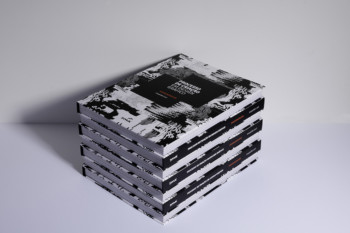 In 2021, Leopoldo Leal (doctor in design at FAUUSP) launched his doctoral thesis in book that won 1st place in the 33rd Design MCB Award (2019) in the category of unpublished written works. “Creation Process in Graphic Design: Pandemonium” (R $ 80) has 280 pages and can now be purchased by Livraria Senac.

Built from practical and theoretical research on the bibliography of design and creative processes, the book is defined by a kind of “notebook of experiments” that can be read in its entirety or leafed through freely.

The structure of the work is based on the eight phases of the creative process described by Robert Keith Sawyer and aims to provide clarity and understanding of the entire creative process, which does not occur in a linear manner.

“Generally, reports on creative processes end up becoming idealized stories, in which only the moment of illumination is presented, leaving in the background all the processes and mechanisms that possibly triggered an idea. The creation process is not a divine manifestation, much less linear and bureaucratic, like a predictable and duplicating production line. It is a chaotic, confusing development with little defined contours, that is, a pandemonium ”, explains Leopoldo, who also received a typographic excellence certificate from the Type Directors Club of New York in 2020 for the same work.

Leopoldo Leal holds a doctorate in design from FAUUSP. He serves as a professor in undergraduate and graduate courses in design. With over twenty years of experience, he worked as a designer at Landor, Interbrand, Futurebrand and GAD ’Branding. He won national and international awards for his thesis Pandemonium won 1st place in the 33rd Design MCB Award (Museu da Casa Brasileira, 2019), in the category of unpublished written works. His work received the certificate of typographic excellence from the Type Directors Club of New York (2020), Silver in Brazil Design Award (2020) and the graphic project was also selected for the 13th Brazilian Biennial of Graphic Design (ADG Brasil, 2019). Leopoldo currently intensifies his research on creative processes in graphic design, lecturing and producing graphic workshops and experiments.

About MCB
The Museu da Casa Brasileira, an institution of the Secretariat of Culture and Creative Economy of the State of São Paulo, which celebrated its 50th anniversary in 2020, is dedicated to the preservation and diffusion of the material culture of the Brazilian house, being the only museum in the country specializing in architecture and design. The MCB’s program includes temporary and long-term exhibitions, with an agenda that also includes educational service activities, debates, lectures and publications contextualizing the museum’s vocation for the formation of critical thinking on topics such as architecture, urbanism, housing, economics creativity, urban mobility and sustainability. Among its numerous initiatives, the Design MCB Award stands out, the main segment award in the country held since 1986; and the Casas do Brasil project, to rescue and preserve memory about the rich diversity of living in the country.