PARTICIPATE IN #MUSEUMSELFIEDAY WITH MCB 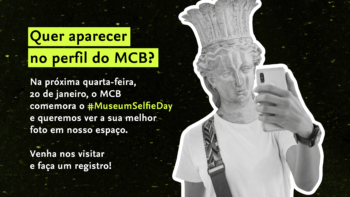 Museum Selfie Day is coming and we invite you to be part of this celebration with us. The event is an international mobilization to promote museums and to participate in this movement with us on January 20, Wednesday, just:

– Mark the Instagram profile @mcb_org on the image and also on the photo caption, along with the official hashtag.

All images published with the marking of our profile will appear in our stories, which will be highlighted later.

Take the next few days to visit the Museu da Casa Brasileira and register. Also remember to leave your profile open on 1/20 for us to view and share the photo. We are excited and we count on you!