LISTEN TO MCB'S SOUNDS ON SPOTIFY 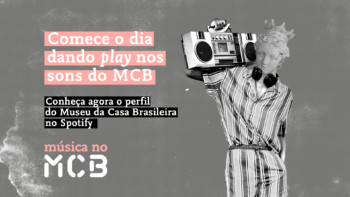 The #MusicNoMCB project has been around for more than two decades and has been bringing sounds to the Museu da Casa Brasileira that have packed countless mornings on the terrace and – now – can also pack your days anywhere.

MCB’s profile on Spotify is the main platform that the Museum uses to communicate with the public through music and already has nine public playlists that aim to complement the reading of museum articles and other content such as – for example – the collection Casas do Sertão, in addition to honoring curators and disclosuring he work of artists who have already been on the stage of the institution’s music project.

Acess https://spoti.fi/2XAjAHz and start the day playing the sounds of the Museu da Casa Brasileira.