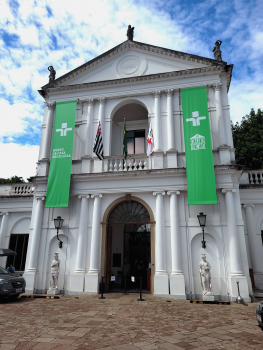 The in-person program takes place from May 17th to 22nd

Held annually by the Brazilian Institute of Museums (IBRAM), the National Week of Museums, this year, takes place between the 16th and 22nd of May. The event mobilizes museum institutions from all over Brazil with various activities and exhibitions. The theme for 2022 will be: ‘The Power of Museums’.

According to IBRAM, the power of Museums is present in their research, preservation, conservation, education, communication, cultural action, management, technological innovation, fulfillment of their social functions and creation of repertoires for the future.

During the 20th National Museum Week, in addition to the exhibitions on display, the Museu da Casa Brasileira (MCB), an institution of the Secretary of Culture and Creative Economy of the State of São Paulo, managed by Fundação Padre Anchieta, will promote a workshop on the sidewalk in partnership with CAPS (Center for Psychosocial Care) Itaim. See below for program details:

MCB Educational
May 17, Tuesday, from 10 am to 12 pm.
In partnership with CAPS Itaim, the activity will be open to the public and will take place on the sidewalk in front of the MCB. During the meeting, issues related to mental health will be discussed.
Free action and no age restriction.

Exhibitions on display
From the 17th to the 22nd of May, from 10 am to 6 pm.
– Design and industry – The history of traditional pharmacy Granado | The exhibition presents a portrait of the company’s pioneering manufacturing, whose trajectory permeates the country’s design, economic and social transformations, in the brand’s 152 years. Curated by Ana Maria Pereira de Almeida and Jacqueline de Araújo.

– Remnants of the Atlantic Forest and MCB Collection | The exhibition consists of photographic and textual panels that correlate the various types of wood from the MCB collection to the various native species existing in the Atlantic Forest, some of which are centuries old, and which, throughout history, have been used in the manufacture of national and even foreign furniture. . Curated by Ricardo Cardim.

– The House and the City – Crespi Prado Collection | The exhibition presents the life and ways of housing the family of the former mayor of São Paulo (1934 – 1938) Fábio Prado and Renata Crespi, who built and lived in the neoclassical manor that today houses the Museu da Casa Brasileira.

– Showcase Brazilian Kitchen Utensils | The exhibition showcase has utensils used in Brazilian cuisine since the 19th century, both for food processing and table service.

About MCB
The Museu da Casa Brasileira, an institution of the Secretary of Culture and Creative Economy of the State of São Paulo, managed by Fundação Padre Anchieta, has been dedicated for 52 years to the preservation and dissemination of the material culture of the Brazilian house, being the only museum in country specializing in architecture and design. The MCB’s program includes temporary and long-term exhibitions, with an agenda that also includes educational service activities, debates, lectures and publications contextualizing the museum’s vocation for the formation of critical thinking on topics such as architecture, urbanism, housing, economy. creativity, urban mobility and sustainability. Among its numerous initiatives, the Design MCB Award stands out, the main award of the segment in the country held since 1986; and the Casas do Brasil project, to rescue and preserve the memory of the rich diversity of living in the country.​