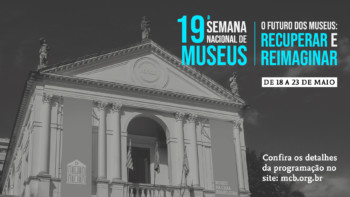 Held annually by the Brazilian Institute of Museums (IBRAM), the Museum Week, in that year, takes place between the 17th and the 23rd of May, mobilizing museological institutions from all over Brazil to commemorate the International Museum Day and encourage discussions in the field of museums . The theme for 2021 will be: ‘The Future of Museums: Recover and Reimagine’.

During the 19th National Museum Week, in addition to the exhibitions on display, the Museu da Casa Brasileira – an institution of the Secretariat of Culture and Creative Economy of the State of São Paulo – will promote the online drawing workshop ‘What is this Object ?. Check the details of the schedule below.

Educational MCB
– Online drawing workshop ‘What is this object’: Books | The activity takes place on Saturday, May 23, from 10 am to 12 pm, via Zoom by prior registration on the Museum’s website. Children and adults are welcome.

MCB on Line 4 – Yellow Metro
– Traveling show: Casas do Brasil: São Paulo connections (São Paulo-Morumbi Station) | On the way to work or on the way home it is possible to get to know a little of the show that was on display at the MCB until the beginning of May. Marcos Freire’s photos.

Exhibitions:
– Remnants of the Atlantic Forest and MCB Collection | The exhibition consists of photographic and textual panels that correlate the various types of wood in the MCB collection to the various native species existing in the Atlantic Forest, some of which are centuries old, and which, throughout history, have been used in the manufacture of national and even foreign furniture . Curated by Ricardo Cardim.

– Altitude Fields | The work of photographer Kitty Paranaguá brings to the museum’s audience a special cutout on how to live in the hills of Rio. Through the documentation of the landscape projected onto the interiors of the houses and their own residents, it provokes a reflection on the precarious condition of the dwellings as a counterpoint to the exuberance of the natural landscape where they are found.

– Ecological Urbanism 2020 | The exhibition in partnership with Harvard University presents a synthesis of the exhibition’s eponymous publication, highlighting proposals from the city of São Paulo, Colombia and Mexico City, among others.

– Showcase of Brazilian Kitchen Utensils | The display window features utensils used in Brazilian cuisine since the 19th century, both for food processing and for table service.