FUNCTIONING OF MCB IN CARNIVAL 2021 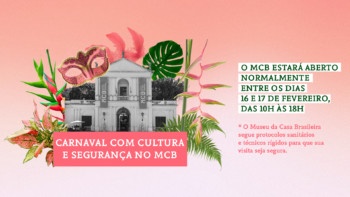 Due to the advance of the pandemic caused by COVID-19, the optional point regarding carnival will not be covered in São Paulo. However, you can still spend February 16th and 17th at the Museu da Casa Brasileira (MCB). We will be open full time, from 10 am to 6 pm, and tickets for visitation can be purchased online or at the ticket office on site.

From Tuesday to Sunday, from 10am to 6pm.

The use of a mask is mandatory during the entire visit. Plan your visit.