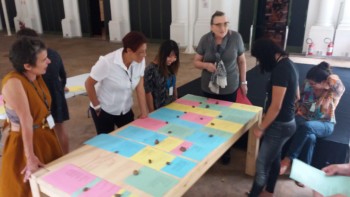 In the meetings, employees from all areas of the Museum participate

“Your Museum” is a series of actions carried out by the Educational MCB team with the institution’s employees. Internally, it expresses the desire to generate bonds between people from different areas of the Museu da Casa Brasileira and results in the exchange of references and an intuitive sense of integration between the doings, interests and practices of different sectors of the museum.

The meetings are attended by people from the cleaning, safeguarding, public guidance, security, research, programming, communication, curatorship, direction teams and all those who express interest in educational activities.

The initiative, as it is linked to determinations of the Secretariat of Culture of the State of São Paulo, is one of the longest-lasting actions among the many fronts headed by Educativo MCB; for this same reason, it has received a series of practical advances to reinvent itself over its years of existence, always renewing curiosity and interest in the exhibited collection, the technical reserve, the documentation center and short-term exhibitions exhibited in the mansion, as well as the interaction of the public with it.

In this program of meetings, the rigor of uncomplicated and exploratory research, typical of mediation practices in non-formal educational contexts, and the sharing of knowledge acquired with the work developed with the visiting public and partner institutions are merged. Perhaps, “Your Museum” has something similar to a scientific dissemination bulletin, considering that in such a program we try to share what we learn throughout each new relationship established.

By offering studio practices, in addition to conversation circles and investigations about inhabiting, perceiving, designing and the immateriality of gestures, the actions carried out within the program aim at the constant movement of questioning and reinterpreting the museum, its collection and the narrative offered by the institution, in order to create – from within – a fertile place to raise awareness, which is nourished by triangulated knowledge, studied, validated and created in groups, in an ecology that involves educational, visiting public, sectors of work and partner institutions.