WHAT IS THIS OBJECT? – The collection 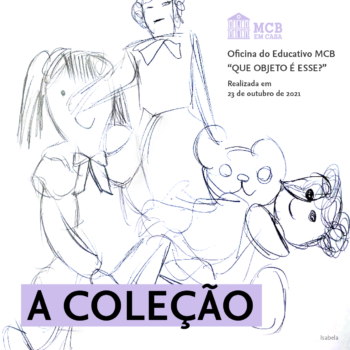 The workshop was held on October 23, 2021 and investigated the collection

Almost everything is collectible!

In antiquity, possessing objects was a manifestation of power. Kings and emperors preserved their heritage. In the Middle Ages, the Church gathered large collections; and that was when the idea of ​​a museum was born.

Over time, the collections went beyond their functionality and gave way to symbolic meanings.

Until the end of the 18th century, collections were private, until museums began to be established as spaces for the democratization of knowledge. At the end of the 19th century, museums were sort of deposits of exotic objects from colonial procedures, transforming them into scientific research institutions.

In the 20th century, architecture saw the need to think and plan the adequacy of the museum in terms of its collection, developing ways to organize and exhibit. In the post-war period, a multitude of museums emerged. And nowadays there are also museums with intangible collections.

The desire to collect, store, conserve, organize is linked to memory, affections, origins, a feeling of belonging, a way of telling one’s story and presenting it to others and to oneself.

_Check part of the productions carried out during the workshop: About the MCB Educational
The Educational MCB proposes practices that articulate looking, doing and thinking so that visitors can assume the role of researchers, researching the contents that the museum offers in a contemporary perspective. The idea is to create challenges for participants in educational activities to raise questions from their own experiences and discover new meanings in relating the visit to the MCB with their lives.