EMBROIDERY AT THE MUSEUM 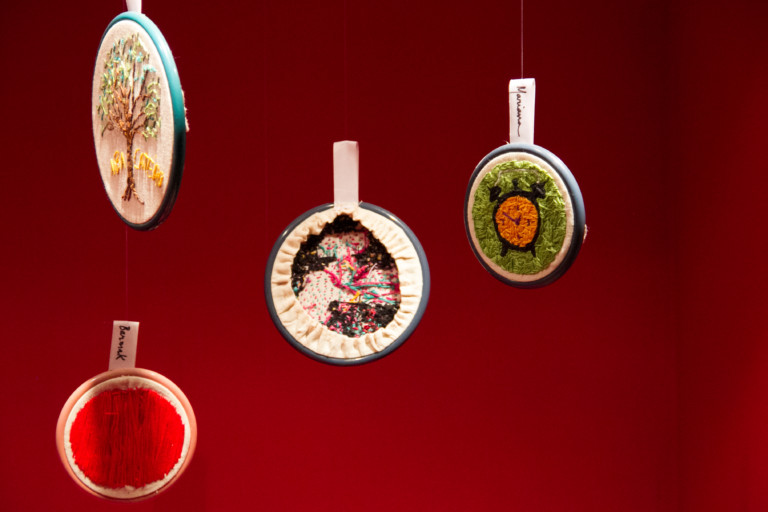 Embroidery was an activity restricted to women, an index of good education and filled the spaces of family homes as household gifts. Decorating trousseaus, beautifying the house with towels and intervening in clothes were the hallmarks of this craft.

The revitalization of this process is recent. Engaging in a dialogue between tradition and the contemporary, “free embroidery”, as it is currently defined, has become a fruitful language for sharing processes, creations and results. The traditional stitches opened up space to the imagination and the creation of images painted with lines, the designs moved away from the fixed models to be authored by the embroiderer and the back of the embroidery sometimes became the embroidery itself.

This technique has been attracting a very diverse audience, in which the memory of thread and needle is usually related to experiences lived or observed since childhood, and, in this perspective, embroidery is consolidated as a democratic and inclusive language, in which any person, regardless of gender and age, may risk a few points.

The embroidery presented here was carried out by the Educativo team, under the guidance of art-educator Beth Ziani, and took place at three different times: during the Dutch Design Today exhibition: Objects that indicate the house of tomorrow, in 2016; in the Seu Museu project, aimed at MCB employees; and with children and teachers at EMEI Dona Leopoldina, the museum’s partner school.

Gardens
The Gardens project, 2016, took place in the exhibition space of one of the Museum’s rooms in the exhibition Dutch Design Today: Objects that indicate the house of tomorrow and offered the public a welcoming environment. Each person who visited the exhibition could embroider, draw or tell stories related to the thread and needle according to the time available. The result was a large collective panel with the participation of more than seventy people who attended the exhibitio

Your Museum
In the Seu Museu project, employees were encouraged to represent their memories about the house or about the MCB itself in different embroidery. Some created their designs to later embroider them, choosing colors, textures and learning some basic stitches. Over the weeks, our employees could be seen embroidering throughout the museum’s different spaces. Forty individual and collective canvases were created.

The Forest in the City
The Forest in the City Project was carried out at EMEI Leopoldina under the coordination of prof. Renata Honora. With drawings made by children between 4 and 5 years old, it resulted in a 1.0 X 1.55m panel. The panel revealed the desire to bring a forest to the city where we live. Woven by many hands, this embroidery passed through the children’s families, school staff and neighborhood embroiderers (Artesãs da Linha Nove), materializing homes, children, games, sun and flowers, along with streets and buildings.

Below are some images of the panel, installed in front of the Museum’s restaurant, in 2017.