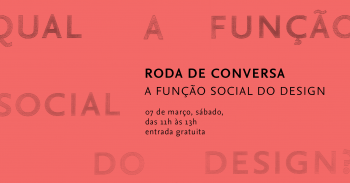 The Design MCB Award, carried out by the Museu da Casa Brasileira, an institution of the Secretariat of Culture and Creative Economy of the State of São Paulo, promotes on March 7, Saturday, from 11 am to 1 pm, a conversation with the theme ‘The function design ‘. The debate will be mediated by professional Marcos da Costa Braga and will be attended by Ruth Klotzel, coordinator of the judging committee for the 2020 Poster Contest, and designer Rico Lins.

The conversation circle has the mission of promoting a reflection on what the social function of graphic design would be in the contemporary scenario. In the last decades, new media, technological and cultural changes and new and old crises have challenged graphic design to develop, reinvent and position itself. The debate also intends to provide subsidies to candidates who will participate in the 34th Design MCB Award Poster Contest.

For Marcos da Costa Braga, chatting is a way to open space to discuss how it would be possible for graphic designers to play a social role that contributes to positive social and cultural impacts. “We will discuss several points, such as: How can a social role be played that contributes to the improvement of society in matters of health, right to information, social security, ecology and the environment, education, work, cultural identity, economy, consumption and citizenship ?; Does the graphic designer have space today to exercise his role in society in an ideal way? ”, Urges the professor and designer.

Miriam Lerner, director general of MCB, says that the conversation wheel and the theme for the creation of the pieces of the Poster Contest are bets for 2020. “We hope that the debate stimulates the exchange of ideas related to the graphic piece itself and the possibilities of design as an effective agent for the promotion of quality of life, generating works with a different focus from those that had been received in previous editions ”, he concludes.

About Marcos da Costa Braga
Graduated in Design (1985) from UFRJ and PhD in Social History from UFF (2005), he is currently a professor in the Department of History of Architecture and Aesthetics of the FAU – USP Project and a member of the research group History, Theory and Languages ​​of Design LabVisual at the same institution. He is a member of the Cultural Orientation Council of the Museu da Casa Brasileira and of the evaluating body of the scientific journals Estudos em Design, Revista Arcos, Educação Gráfica (Brazil) and RChD creación y pensamiento (Chile). Author of several articles and books on the history of design in Brazil and one of the coordinators of the book collection ‘Pensando o Design’, he organized the book ‘The Social Role of Graphic Design’ and, in partnership with Priscila Farias, the award-winning work ‘Dez Essays on Graphic Memory ‘. He coordinated the jury of written works for the Design Award of the Museu da Casa Brasileira in 2013 and 2014. He has professional experience in Product Design and Visual Programming, and his main lines of research are history of design in Brazil and graphic memory.

About Rico Lins
Born in Rio de Janeiro, he is a designer, illustrator and educator. He lived between Paris, London and New York since 1979. He currently lives in São Paulo developing visual identity projects for print and digital media and exhibitions. With individuals at the Center Georges Pompidou (1982), Instituto Tomie Ohtake (2009) and Museu da Casa Brasileira (2016), he organized, among others, the Brazil in Poster shows (Pôle Graphisme Chaumont, 2005), Connexions> Conexões (Sesc Pompeia, 2009) and Graphic Manifesto (Espaço Cultural Porto Seguro, 2017). He has been a member of the AGI Alliance Graphique Internationale since 1997.

About Ruth Klotzel
Designer graduated from FAU-USP, holds a Master’s degree from the same university. He taught in the FAAP architecture course and in the undergraduate and postgraduate latu sensu of the design course at Senac. She was co-founder of ADG Brasil and Director in three terms and vice-president of Icograda for two terms (2003-2005 and 2005-2007). She has participated, as a judge, in several national and international design contests, mainly poster design: Bio (Slovenia), 4th Block (Ukraine), Poster for Tomorrow (France), ADG Biennial (Brazil) and Award Poster Contest Design MCB (Brazil). He is a member of the presidency of the Bienal Iberoamericana de Design (Madrid) since 2007, and collaborates with Poster 4 Tomorrow (Paris), in addition to working as a designer in his Infinito Studio (São Paulo). Coordinator of the judging committee of the 34th Design MCB Award Poster Contest.