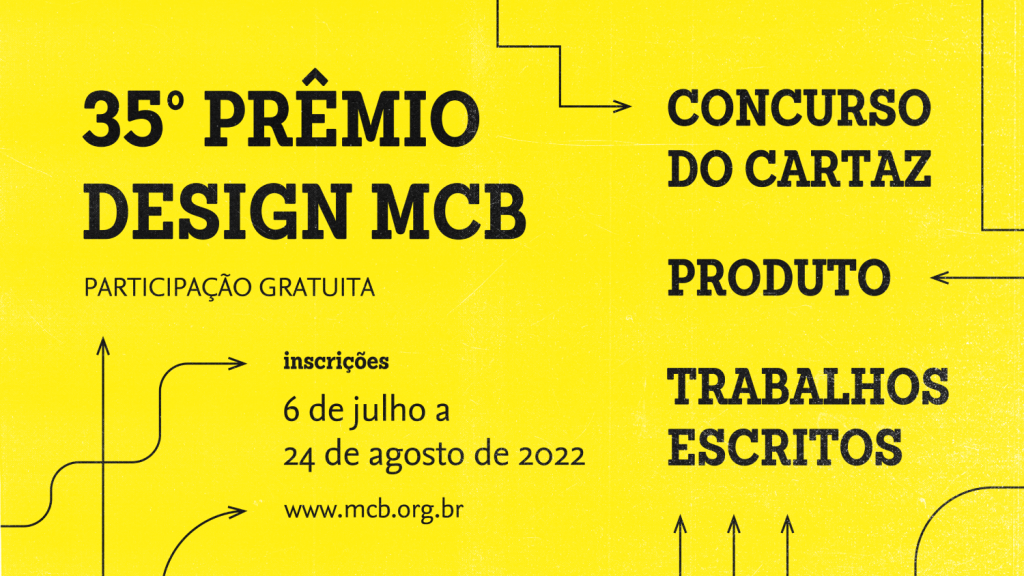 The Museu da Casa Brasileira, an institution managed by Fundação Padre Anchieta, opens registration for the 35th MCB Design Award. Those interested in competing in the Product categories (Construction, Electronics, Lighting, Furniture, Textiles, Transport, Utensils) and/or Written Works (Published and Unpublished), as well as in the Poster Contest, may apply from July 6 to on August 24, 2022 through the MCB website. This year, registration is free.

José Roberto Maluf, President of Fundação Padre Anchieta, believes that the longevity of the award reveals the importance it has for the Brazilian industry and market. “The MCB Design Award gains new strength in 2022, stimulated by the free registration and with the return of the in-person exhibition at the end of the year, presenting the winners and selected by the judging committees”, he comments.

“The Design Award promoted by the Museum is a prospective action of continuous analysis on the contemporary production of its themes of interest, in addition to recognizing the excellence of Brazilian design and encouraging its strengthening and dissemination”, says Giancarlo Latorraca, Technical Director of MCB.

To evaluate the works, the 35th Design Award will have three judging commissions. In the Products category, Giorgio Giorgi Júnior is the coordinator for the third time (2009, 2011 and 2022). Professor at FAU-USP since 1989, graduated in Industrial Design from Mackenzie (1976), he has a master’s degree in Communication and Semiotics from PUC-SP (1985), PhD (1998) and professor (2018) from FAU-USP. The evaluation will take place in two phases: in the first, the competitors must send the images of the projects, descriptive memorial and technical details through the registration system; those selected by the judging committee must deliver a physical copy for the second phase to continue in the evaluation process and which can also be part of the exhibition.

The Judging Committee for Written Works will be coordinated by Myrna de Arruda Nascimento, Master and Doctor in Architecture and Urbanism at FAU-USP, and Master in Communication Sciences at Faculdade Cásper Líbero. Currently, she is a professor and researcher at the Design department at FAU-USP, in Architecture and Design courses, and at Centro Universitário Senac, where she also coordinates the research group on Communication, Architecture and Design. Written Works, whose theme is related to the field of design, will be evaluated in a single phase: after reading, the judges will meet to carry out the final evaluation. The ‘Published Written Works’ modality will analyze works in printed book format, in the first edition, published in the last 3 years, mandatorily with ISBN and Catalog Sheet, whose copyright belongs to the participant or that have due authorization. On the other hand, ‘Unpublished Written Works’ will consider stricto sensu postgraduate works (dissertations, theses and professorship) presented in the last 3 years.

To coordinate the judging committee of the Poster Contest, which this year will take place simultaneously with the Product and Written Works categories of the 35th MCB Design Award, Leopoldo Leal was the guest. Professor at Senac’s postgraduate course, his book Process of creation in graphic design: Pandemonium, is the result of his doctoral thesis, awarded 1st place at the Museu da Casa Brasileira Award, Type Directors Club, Brasil Design Award, Latin American Design Awards and finalist in the Jabuti 2021 award.

Participants in the Poster Contest must develop a poster for the 35th Design Award, as an autonomous graphic piece, with its own strength and language. The graphic project must present a dynamic visual concept and creatively reflect the identity of Brazilian design. In this edition, the suggested theme for the development of the posters is: “Project, process and path”. The evaluation of the poster will be exclusively digital and the participant must send, obligatorily, a static image and can also send an animated version of the poster and a document that represents their creative process.

Registrations
Participants in the Product and Written Works categories can submit any number of projects, in one or more categories. The entries for the Poster Contest will be restricted to 02 (two) projects per registration, which is linked to the CPF of the responsible author. Applications can be made until August 24, 2022.

About the MCB Design Award
The MCB Design Award has been held since 1986 by the Museu da Casa Brasileira. The award reveals talents and recognizes professionals and companies. Between July and August, MCB receives creations in the following categories: Construction, Transport, Electronics, Lighting, Furniture, Textiles, Utensils and Written Works, in addition to the Poster Contest. Entries are reviewed by three independent judging committees, one for the Product categories, one for Written Works, and the third for the Poster Contest. Finally, the winners are chosen, divided between 1st, 2nd and 3rd places and honorable mentions, in addition to the selected ones that also make up the exhibition. As a result of the MCB Design Award, the Museum holds an exhibition with the winners and selected from each category of the edition, which will be on display for about two months.