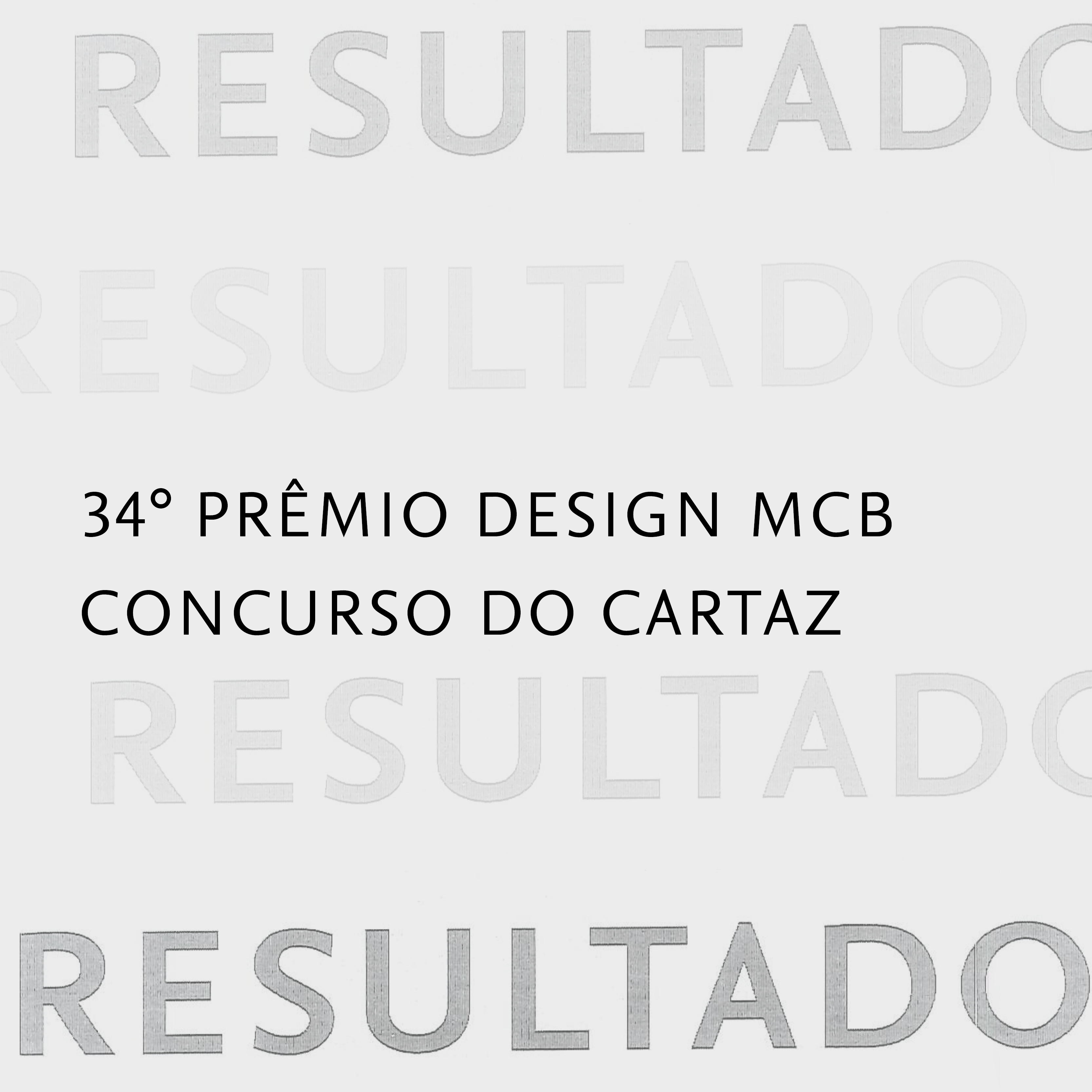 The poster is meant to occupy the streets. In its remote origin, it replaced the shouting of messengers on the corners of emerging urban centers. Even today, in some major cities in the world, the poster has a dedicated space and an important role. In Brazil, unfortunately, in addition to specific supports being almost nonexistent – basically at bus stops and subway stations – most of them are advertising spaces, for commercial exploitation.
The poster contest for the Design Museum of the Brazilian House Award reinforces and enhances this piece as an important means of graphic expression, without disregarding the existence of other formats, supports and means of communication.

THE CONTEXT OF THIS EDITION
If we can say that each edition of this contest is very private, this one seems to be even more private.
There was, for the first time, a theme to be followed – the Social Role of Design – and the moment was crossed by the pandemic, making the format and the selection process to be digital.
As if by an irony of fate, this context enhanced the proposed theme, revealing solutions that included very current images, such as protective masks and messages on apartment windows, for example.
This year’s jury was also very peculiar: more than half of the members are young designers and the difference between the youngest and the oldest person in the group is almost 2 generations, which gives a wider range of views and opinions, enriching a lot the entire process.
It is important to note that although the evaluation was done digitally, it was not just a vote, that is, it was not a simple selection of posters that were more to the “taste” of each person.
After making an individual selection, the jury met (remotely) for several hours, reviewing all the posters that had received any vote, discussing the choices, eventually rediscovering any proposal. Then, the debate around a collective pre-selection of 22 posters – which will form a virtual exhibition – resulted in the choice of the winning poster and 6 more finalists, which deserved a special mention.

THE PROPOSED THEME
This year’s theme highlights the old discussion about the nature of Design and the need to recognize the role of activity as an aggregator of value not only commercial, but of quality of life for people and the planet in general.
In the last years of the competition, the concern with the social aspect of design appeared naturally in some projects, as a reflection of our socioeconomic context. After all, we are all political beings, insofar as we make our choices not only by voting, but in our daily lives: in our way of consuming, getting around, feeding, relating to our fellowmen and with nature in general. And we know that the industry is not simply concerned with producing what is necessary, but also with creating consumption needs. Design plays a key role in this discussion.
Exposing this aspect of design is important to enlighten the general public and instigate reflections and debates among designers about the social role of the activity.

THE NATURE OF LANGUAGE AND THE CHOSEN POSTER
The 7 finalist posters expose several aspects related to the proposed theme: the caipira bank, composed with the CMYK chromatic system logic; a chair full of spikes, which prevents us from sitting, representing the exclusive design; the black garbage bag, an object that everyone knows and that contains our discards; the reference to architect Lina Bardi and her look at a vernacular seating solution; the design of the protective mask templates, so necessary at this moment; stickers – which are used today as an entrance to the Museu da Casa Brasileira – composing a poster; demolitions and gentrification in large cities. Each points to some possible reflections.
As a project activity, visual design obeys methods, which in turn are guided by technical conditions and people’s repertoire. In addition to its objective character, it also navigates the territory of subjectivity: constructive structure, shapes, colors and images refer to sensation and memory, carrying particularities of each individual’s collective and individual experiences.
The winning poster, by Leonardo Sá Rocha Sarabanda, embraces this richness, is a well-structured project that makes good use of image, color and typography. He highlights a garbage bag, upside down, as the only object on the poster. An emblematic image, which carries with it many meanings: it displaces garbage from its usual place and orientation, like a “ready made”, asking about the value of objects and what we discard; it shows us how we are the same (“from dust we come, dust will come back”) and refreshes the image of garbage when seen from a distance, making it look like a light bladder suspended on a string, or a rose bud, for example.
In addition to these images, this poster suggests several

The winning poster, by Leonardo Sá Rocha Sarabanda, embraces this richness, is a well-structured project that makes good use of image, color and typography. He highlights a garbage bag, upside down, as the only object on the poster. An emblematic image, which carries with it many meanings: it displaces garbage from its usual place and orientation, like a “ready made”, asking about the value of objects and what we discard; it shows us how we are the same (“from dust we come, dust will come back”) and refreshes the image of garbage when seen from a distance, making it look like a light bladder suspended on a string, or a rose bud, for example.
In addition to these images, this poster suggests several possible associations, not being exhausted in the objectivity or in the intention of those who created it, remaining alive in the possibilities of interpretation of those who read it. It does not provide us with solutions, but it evokes questions that indicate our uncertainty and our responsibility for the future.

Author: Leonardo Sá Rocha Sarabanda
Supervisors: Celso Longo and Daniel Trench
Educational institution: Associação Escola da Cidade
Sao Paulo city
State of Sao Paulo
The winning poster carries a strong current message, at first gloom hopeless, but it also opens up the option of other readings to counter our waste, represented by the iconic black garbage bag, to an elegant diagram and typography. This new dimension leads us to other associations, to light, flower and balloon images, for example, bringing traces of humor and irony and enriching the range of possible interpretations. It is a well-structured poster and very well resolved from the point of view of image, color and typography.

Author: Alessandra Valerivna Kalko
Sao Paulo city
State of Sao Paulo
The sad urban phenomenon of demolitions erases memories and opens the way for gentrification and real estate speculation. This poster, which makes a more direct social criticism, portrays the Brazilian house by its absence and gives life to the record of the demolished house by applying human silhouettes in action. It also raises pertinent questions related to the award and the social role of design: – After all, what is the important design in this context of crisis?

Authors: Giulia Fagundes, Giovani Castelucci, Guilherme Vieira
Office: Daó
Sao Paulo city
State of Sao Paulo
The image of the spiked chair reminds us of the surrealist objects of Meret Oppenheim or Man Ray. But, in this case, the strangeness and disgust that the image provokes us, represents an impactful way of excluding design. It is also quite significant that he makes use of an object so commonly used to represent product design – a chair – treating it as an element of critical articulation. It is very pertinent with the theme of this edition of the contest and raises a discussion both in relation to design and to Brazilian society in the current context.

Author: Jeferson Luiz Braz da Silva
City: Rio de Janeiro
State: Rio de Janeiro
The poster deals with the reinterpretation of a simple object, the caipira bank, within a modernist concept of modularity and with a poetic approach. Furthermore, it makes a clear reference to the productive design processes, by transforming the image into a pattern, repeating it in several lines and columns, and referring directly to the four-color printing system, CMYK.

Authors: Luciana Lischewski Mattar, Gabriela Gennari
Advisor: Marcos da Costa Braga
Educational institution: Faculty of Architecture and Urbanism, University of São Paulo
Sao Paulo city
State of Sao Paulo
This object poster is a “do-it-yourself” of individual protection masks, a new item of great symbolic value that has become essential in our lives. The authors of the project suggested that the poster should be printed on filter paper so that it could be cut out and used, making it an object of public utility. It communicates the current moment and points out the relevance of accessible design and social purpose, adding a good visual solution and technical quality.

Authors: Noam Barg Pinto, Karime Zaher and Tamara Crespin
Sao Paulo city
State of Sao Paulo
The means of access to the museum, the sticker, becomes the main message of this poster and refers to the role of design as a social organizer. Being made of adhesive paper, it carries the invitation to enter the museum and becomes itself – through interaction with the public – the entrance itself, addressing the theme in an original way. The use of this graphic sign of access to the museum can also be interpreted as representing access to design and culture.

Author: Pedro Modenesi Moraes
Advisor: Marcelo Batista Pliger
Educational institution: Escola Superior de Propaganda e Marketing
Sao Paulo city
State of Sao Paulo
This poster refers to the “roadside chair”, made roughly with four pieces tied and highlighted by Lina Bo Bardi in 1967 as a reflection on the basic solutions for sitting. The piece is very well solved graphically and generates an impact by creating contrasts combining the stripped sketch, using few colors (red and black on a white background), negative and positive, distinct bodies of typographic font (the number 34 quite large and other information in font smaller). It stands out for its quality in historical reference and graphic composition.

Get to know the judging panel of the Poster Contest – 34th Casa Museu Design Award by clicking here.

About the MCB Design Award
The Design MCB Award has been held since 1986 by the Museu da Casa Brasileira, a cultural institution that celebrates 50 years in 2020. The award – the most traditional of the segment in the country – reveals talents and consecrates professionals and companies. The Prize is divided into two main moments: the Poster Contest and, next, the prize for products and written works. In 2020, due to the pandemic of the new coronavirus (covid-19), the award for product design and written work was suspended. The forecast is that the 2021 edition of the Design Award will be maintained. “It is a project of fundamental importance for the institution and for the design universe, and we plan to resume next year, with the normalization of the museum’s activities”, comments Miriam Lerner, Director General of MCB.

About MCB
The MCB is temporarily closed. In the current scenario, MCB adapts its content to digital, making several materials available in its #MCBemcasa campaign and the #CulturaemCasa platform. Among the content launched, there is a virtual tour, playlists, articles and activities on social networks. Follow!

MCB Recomenda: Live de Luciano Ruas no perfil do a