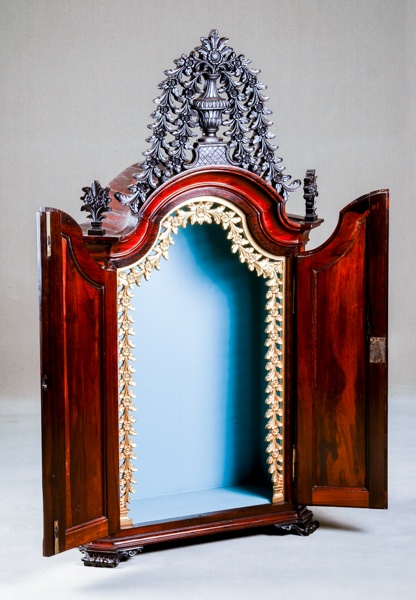 When we think of oratories, a heritage that makes up the material culture associated with Catholicism, we immediately relate these goods to the churches. However, the residences after the religious temples were also essential spaces for religious practices. Domestic worship dates back to ancient civilizations (Oriental and Classical), Egyptians, Greeks and Romans, who worshiped their deities on altars or small spaces inside homes.

The origin of the oratorios dates back to the late Middle Ages, more precisely the 15th century, a period in which only the Iberian nobility had access to this artifact and was associated with obedience to Catholicism. With the Inquisition intensifying the persecution of Jews and Moors, Catholics and above all the “new Christians”, or those who still resisted complete conversion, fearing punishment from the Holy See, began to wear it in their homes, as a symbol of their conversion to Catholicism, the oratorios.

Thus, contrary to what many of us think, the existence of oratories was never limited to religious temples, on the contrary, their presence was more evident in homes. In Brazil, this has occurred since the first colonial centuries, motivated by the strong tradition of Portuguese syncretic Catholicism, the small number of churches and the isolation of communities. Factors that ended up conditioning popular religious practices in many regions to the domestic environment (urban and rural), often far from Catholic doctrine.

* Wilton Guerra acts as manager of the Research and Documentation Preservation Center of the MCB (area responsible for the collection) since 2006. He holds a master’s degree in Museology from USP (2015), a bachelor’s and a degree in History from PUC-SP (2003) and a museum technician from Centro Paula Souza (2007). Since 1998, he has been a researcher at the Museu da Casa Brasileira (MCB). In 2000, he organized three volumes (Architecture, Objects and Equipment) of the collection “Equipment, Uses and Customs of the Brazilian House” (Official Press). In 2005, he coordinated the project “Virtual Collection – Equipment, Uses and Customs of the Brazilian House” (Ernani Silva Bruno Archive), which fully made the file available for consultation on the institution’s website. In recent years, he participated in the development of exhibitions such as: “Renata e Fábio – A Casa ea Cidade” (2006); “MCB Collection” (2007); “The Brazilian House of MCB – Memories of a Collection” (2008); “A Casa e a Cidade – Crespi-Prado Collection”, “Wood and Furniture – A look at the MCB Collection” (2012) and “MCB Collection – new donations” (2016). In 2015, in the coordination of the Protocols Axis, of the Collection Policy Committee of the Secretariat of Culture of the State of São Paulo, together with the team of three other museums (Immigration Museum, Coffee Museum and India Vanuíre Museum) it developed the first Protocol for Description of State Furniture.